Borrow From History To Create New Stories by Donna Galanti

When I write, I return to the magical worlds of being a kid, where monsters and faeries roam the land. Through my stories, I become these characters – and assume their powers. Mythology is a great place to find such inspiration!

As writers, we don’t have to limit our imagination and it’s also okay to “borrow” from history. Borrowing from history or even mashing up different cultures and times in history can bring on new story ideas (students love hearing this in my school visits). Many authors do it from fantasy to real life.

Here are a few examples of books that borrow from mythology...
K. L. Armstrong and Melissa Marr with The Blackwell Pages series – Norse Mythology

I am a sucker for mythology and fell in love with Greek mythology long ago in school. In my Lightning Road series, the Greek Olympians fell from Mount Olympus, had to relocate, and lost their power – and their descendants desperately want it back. In creating this world I took many parts of mythology and made them my own. Remixing culture can be fun, to use ideas from different cultures and history to create a new story that is uniquely yours.

Here are some of people, places, and beasts I made my own… 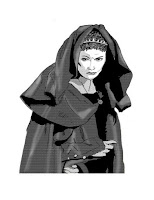 ARTEMIS IN GREEK MYTHOLOGY: Goddess of the hunt, chastity, and the moon. She is the protector of nature and the hunt; both wild and tame animals are under her protection.

ARTEMIS IN THE LIGHTNING ROAD SERIES: Not a protector. Not only does she hunt beasts, she hunts children as well.

Artemis excerpt:
“Her nose and lips were thin like the rest of her, a face more handsome than pretty. She wore matching plum-colored velvet pants and a hooded tunic that fell to her knees with open slits on either side. A rough-made bracelet of polished braided wood encircled her left wrist. Her white shirt was flecked with gold threads, and billowy sleeves puffed out above her slender hands resting on a burnished metal belt hanging low across her hips. A dagger with an intricate handle dangled from her belt. Form-fitting black leather boots laced up her legs and one foot tapped the floor. The strangest thing about her was the black sunglasses she wore. They had round frames, and the lenses flickered alive with torchlight.” 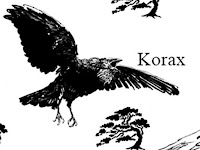 KORAX IN GREEK MYTHOLOGY: Or Corax, means raven. Corax was also a scholar.

KORAX IN THE LIGHTNING ROAD SERIES: These are ravens but no ravens we know. They are monstrous beasts that can transport people and act as spies for Artemis.

Korax excerpt:
“As the swarm drew closer, they appeared as monstrous black ravens with a giant wingspan that filled the sky’s empty spaces. Their massive beaks opened and closed with gurgling croaks, but it was their eyes that terrified me. They burned a bright green, shooting us with a mean glare as they torpedoed down. Chanting words echoed across the dark land: light bringers, light bringers. Imagined words? The whirring of wing beats throbbed in my head as they grew closer, matching the beat of my own thudding heart.” 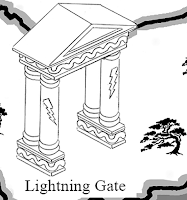 ZEUS’S LIGHTNING BOLT IN GREEK MYTHOLOGY: A sign of power and of Zeus’s power to rule the sky.

ZEUS’S LIGHTNING BOLT IN THE LIGHTNING ROAD SERIES:  Zeus’s lightning bolt created the Lightning Gate, a portal between Earth and Nostos, the world where the descendants of the Olympians have relocated to as their home. Zeus still rules the sky through this gate as he steals people from Earth along the lightning road that connects both worlds.

Lightning Gate excerpt:
“The gate’s blaze spun a web of brilliance then dimmed and died out, leaving us in deep shadows under a rising orange moon. The massive portal filled the small meadow like a tarnished bronze statue that had weathered many storms. Its two Greek columns stood on round stone blocks, and another wider slab overhead connected them. Carved figures and animals moved through the gate’s ancient metal as if alive. The scent of blistered tin blew off the door to another world, still standing after 2,000 years. Built with lost Olympian magic, I’d once again traveled through it to rescue another friend.”

THE CADMEAN BEAST IN GREEK MYTHOLOGY: Known as the Teumessian Fox or Cadmean Vixen, is a gigantic fox that preyed upon the children.

THE CADMEAN BEAST IN THE LIGHTNING ROAD SERIES: Giant beasts with red eyes and flame-throwing breath. Used as guard dogs to watch over captive children, and chase them down when necessary.

Cadmean Beast Excerpt:
“Their heads were even with the shoulders of the men and their legs were as big as a horse’s. Fur covered them in slicked back, shiny spikes. They sniffed the platform and panted, thick tongues pulsing out of their mouths, and saliva dripped down in big gobs. Muscles rippled up and down their bodies  like quivering arrows as their bushy tails swished back and forth. I flinched with each swish, my feet desperate to run, but they were frozen in place. The foxes jerked their heads up in unison, and it felt like spiders skittered up my spine. Red eyes glowed bright like lava and burned fiercely into mine, hungry for what I feared was me.” 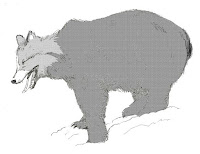 AGRIUS BEAST IN GREEK MYTHOLOGY: Is one of a pair of twins, half-man and half-bear. Agrius and his brother grew to immense strength and size and were feral creatures, attacking strangers to eat.

AGRIUS BEAST IN THE LIGHTNING ROAD SERIES: A giant black beast bearing a bear’s body and a wolf’s snout that is hunted by Artemis in the Wild Lands, but also known to befriend some people.

Agrius Beast Excerpt:
“Luck seemed to be all we carried for the moment. I jumped on the back of the creature behind Ash, sinking into its thick fur. She urged Charlie on who stood frozen, mesmerized by the beast’s boulder-sized, shaggy head. Its pointed ears and snout twitched as it trembled, eager to be on the run.” 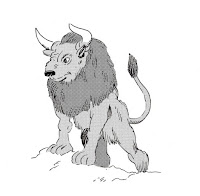 CRETAN BEAST IN GREEK MYTHOLOGY: Known as the Cretan Bull, it was the bull Pasiphaë fell in love with, giving birth to the Minotaur. The Cretan Bull was feared and eventually captured and sacrificed.

CRETAN BEAST IN THE LIGHTNING ROAD SERIES: Half lion, half bull. It’s held captive in the Wild Lands and hunted by Artemis.

Cretan Beast Excerpt:
“I skidded to a stop, riding wet leaves. Charlie’s eyes blinked with surprise as I shoved him aside and turned to face the unleashed creature. It flew over my head—an exploding mountain of fur and legs and tail—and slammed onto the ground. It turned to face me, panting. Pacing back and forth, its massive paws glinted with curved nails as it smashed the mud. Steam bellowed from its giant nostrils and horns protruded from a head covered in a shaggy brown mane. Tinted burnt orange, the beast raged part lion, part bull. I backed away from the monster, hauling Charlie with me.”

I love to write about monstrous people and beasts as I face my own (monstrous) fears by writing about them.  I’ve always loved Greek mythology which has lots of monstrous creatures in it.  And sometimes the monsters we fear are not the ones we should be afraid of – it’s the ones who don’t appear monstrous that can be the most evil.

Do you enjoy borrowing from history to tell stories? What are some of your favorite stories that borrowed from mythology or other history?