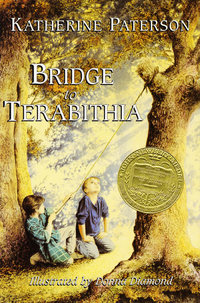 I have to admit that I came late to reading middle grade classics. As a kid, I was into books like the Hardy Boys and Nancy Drew, and the various series by British author Enid Blyton. Then I graduated to Agatha Christie and Georges Simenon. I had my John Le Carré phase and then became an English major: Shakespeare, Milton, Dickens were my daily fodder for many years.

When I started writing, I wrote adult books--humorous tales, or mysteries set in Japan. It's only when my kids were born and I was reading to them that I became enamored of middle grade. Roald Dahl, Philip Pullman, and J.K. Rowling entranced me.

I read Bridge to Terabithia a couple of years ago, and it was like a punch in the gut. As a parent, anything involving the death of a child makes me cry, and this novel brought out the tears in buckets.

Things I Loved about the Novel:
1) The friendship between a boy and a girl. It starts off as a rivalry--Jess wants to be the fastest in fifth grade, but is beaten by Leslie, the new girl at school--and ends up as a deep friendship in which the imagination reigns supreme.
2) Paterson does an amazing job of depicting children's lives--the meanness, the struggle, the triumphs. She also does an incredible job of mining grief, with all its anger, and blame, and hurt.
3) The writing itself is simple and elegant. This is a slim book, but its ripples go on and on, lasting a long time after you close its covers.

What other middle grade classics would you celebrate? Leave a comment, so as I can add to my reading pile.
Posted by Michael G-G at 10/20/2014