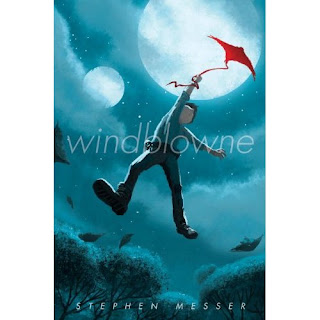 SM: Some people think you need connections in order to get published, and that’s true—but you need to forge those connections yourself, by networking and meeting writers, agents, and editors. Conferences are great places to do that, and also classrooms and social networks. Get involved, and you’ll make the connections for yourself.
PM: What advice do you have for those interested in writing for middle-grade readers?
SM: Read incessantly in the genre, not only the classics but also new releases, until you understand the literature backward and forward. Try to become an authority on middle-grade books at the same time you are trying to write them.
Thank you, Stephen! I hope everyone will check out Windblowne. It’s a fantastic middle-grade adventure! And be sure to visit Stephen’s website, where you can actually see one of those aforementioned pictures of him flying a kite: http://stephenmesser.com/
-Dawn Lairamore
Posted by Project Mayhem at 12/10/2010