The Future of Our Libraries 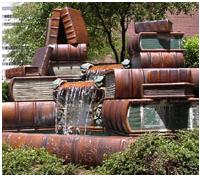 I wrote the main part of this piece posted below several months ago after a particularly good day at the library when I was feeling overwhelming library love. It seems appropriate to post it now,  as libraries are under even more strain today than they were then.  Like every writer I know, I love libraries, but until a few years ago I have to admit I took them somewhat for granted. Last year, when the city I lived in announced they were closing three branches, I was shocked, particularly when I learned those branches were in the parts of town where free access to books was most needed. It hadn’t even occurred to me that libraries could actually close. In this era of budget cuts and the changes in publishing, I worry about other libraries, not just in my city, but everywhere. They are so vital for so many reasons, not only as affordable ways for people to enjoy books, but also as the cultural repositories of our society. I only hope society will continue to value them. I’d love to know what others think about the future of  libraries. What do you all see as how they will change to meet the future? Or even, should they change? Please leave your ideas in the comments. And here’s my original piece:
Why I Need Libraries to Write Fiction
I’ve been pondering exactly what role libraries and librarians play in my own job. I write fiction, so some people assume I just make things up. Why would I need a library? Well, I do make things up, but I couldn’t have written WILDFIRE RUN without the fabulous library and librarians in my city.
I have a pretty good imagination, but for contemporary fiction to be believable, it has to be based in some sort of reality. I wrote a book set at Camp David, and Secret Service agents play a part in the book. It’s not so easy to walk up to the gates of Camp David and knock, expecting to be let in, or to find Secret Service agents who will talk about their jobs. So I researched. That’s not an easy task either. If you Google Camp David and books, you get many examples of fiction about it, but not much nonfiction. People who work there don’t write tell-alls. I didn’t want to base my book on some other writer’s imagination, so I knew I’d have to take another approach.
There were two great books at the library, and I’m so thankful they were there, but I needed more. I ended up tackling rows of biographies on Presidents who’d been at Camp David. By looking in the indexes, I could find mention of the place, and I managed to glean pieces of valuable information. I couldn’t have done that without the library unless I had ordered dozens of books, hoping I’d hit upon a useful one.
Besides Camp David, I needed confirmation of some other details in my story. For reasons too long to explain here, I needed to know there were old jeeps with large doors. I didn’t want to just stick a jeep in my story and claim it was the right size. I didn’t know how to find that information. I spent hours on the internet and found out way too much about how to buy parts to restore jeeps, but I couldn’t find the detail I needed.
I went to the library. Since I’m embarrassed by some of the weird things I ask librarians to help me find, I rotate which librarians I approach, so they won’t remember me and take up hiding when they see my face. I explained what I wanted, and a wonderful librarian pointed me to something called “Jane’s Military Vehicles”. I haven’t researched Jane, so I can’t explain why the book has such a funny title, but it’s real, official and incredibly detailed. I found my jeep.
Sadly, I was too excited over the find to take note of the librarian’s name. I did thank her, but then I went off to gloat over my glorious bit of knowledge. So thank you again, Mystery Librarian, whoever you are. You may be unknown, but you aren’t unsung. Next time you see someone in a fake nose and glasses wanting to know how to find the wolf population in Slovakia, it just might be me. I couldn’t do my job without you.
Posted by Dee Garretson, Author of Wildfire Run (HarperCollins 2010)
Posted by Project Mayhem at 3/11/2011

Email ThisBlogThis!Share to TwitterShare to FacebookShare to Pinterest
Labels: books, future of our libraries, librarians