DragonCon (and Conferences in General) 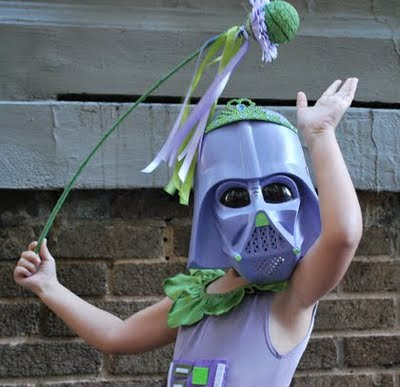 This is not a costume I actually witnessed, but when I saw it I decided it was too adorable not to use. I take it she's some kind of Fairy Godmother Darth Vader.
Anyway, I took my kids to DragonCon in downtown Atlanta this weekend. With single day passes costing $50, and bringing 3 kids, we couldn't actually afford to get in to the conference. We still had a lot of fun just wandering around Peachtree Center and the hotel lobbies, though.

I met up with my friend and soon to be published author, Cole Gibsen, and her husband. Cole's debut YA novel, Katana, will be out in March 2012, from Flux. You can read more about Cole on her website. We've been friends for a little over a year, and have a lot of the same interests, and it was really fun to meet her, but it was a lot less glamorous than one might expect. The hectic rush of costumed geeks and freaks passing haphazardly around us was entertaining, but it wasn't exactly conducive to conversation. I also had my two daughters and one of their friends with me, so Cole and I didn't get to talk a lot of shop.

I'm bringing all this up, not to complain, but to pose a question to all you other writers out there: How often do you go to conferences, what kind of conferences do you go to, and how do you justify the cost?

I'm going to the World Fantasy Convention 2011 in San Diego next month, and I'll be going alone (as in without my family) so I'm hoping to get more networking done, but my understanding is that this kind of convention is more of a party than an industry business meet-up. Perhaps I'm going to the wrong conferences?

I don't know, I'm mostly joking, but I can't help but think that in this day and age, with the level of communication we have on the internet, paying for passes, hotels, meals, and plane tickets seems to make attending a bit prohibitive. Sure, if you're published you can write all your expenses off, but that doesn't make it free.

What do you guys think? Do you go to conferences? Which ones? How often? Am I just to poor to have a dream of becoming a published author?
Posted by Matthew MacNish at 9/05/2011