I’m very pleased to welcome Robert Clark to Project Mayhem today to talk about his new middle grade mystery debut, DIZZY MISS LIZZIE, and to offer a giveaway of it. My 11-year-old daughter read it first and liked it so much, I had to take it away from her at the dinner table and then also the same night when she went to bed (mean mom.) She got up early the next morning to finish!  That’s about the biggest endorsement I can give to a book. The book also has some fascinating real history in it, which I always like in a story. In interviewing Robert, I found out some interesting things about him as well. It’s always a surprise to find out about a writer’s background!

Thirteen-year-old Kasey Madrid finally has the freedom she's always wanted. Instead of putting up with sitters or camps, she can spend the summer home alone in their "new" house. Never mind that the house is a creepy old place built in the nineteenth century. The creep factor skyrockets when Kasey meets a nineteenth-century girl named Lizzie Bellows in the basement. It takes some time for Lizzie to convince Kasey she's not a ghost, though neither girl understands why they can see each other when they live 120 years apart. The difference in their worlds doesn't stop the two from becoming fast friends. Lizzie's life isn't easy though. In her time, her parents died in a fire many believe Lizzie started herself. As the summer passes and Kasey learns more about her own past, she is shocked to discover Lizzie is part of a terrible Madrid family secret. It's up to Kasey to go back to Lizzie's world to unlock the secret and clear Lizzie's name.

Bob, you have a fascinating background for someone writing books for middle graders. Can you tell us a little about yourself? 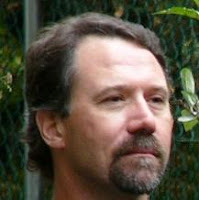 I'm a computer scientist with the Department of the Navy. I live in SE Massachusetts (near Fall River) with my wife and two sons. I started writing fiction in early 2007 and am currently at work on my eighth novel. Dizzy Miss Lizzie is my third and it got me an agent in the fall of 2009. The agent couldn't sell the manuscript and we parted ways after less than a year. I kept writing new material while submitting Lizzie to smaller houses. I turned down several offers, then finally agreed to a contract with Marsha Morris at Stanley Publishing in August, 2011. As luck would have it, I got an agent for another book (Good Golly Miss Molly) just two weeks after signing with Stanley. I am now represented by Frances Black and Jennifer Mishler of Literary Counsel.

How did you think up the idea for the book? (Dee’s daughter’s question)

I live a few houses away from the one-time summer home of Lizzie Borden's family (Lizzie lived there in the 1880s). We thought about buying the house, but it was too old for our tastes. As I walked by it one day, I wondered "what if we did buy it" and "what if we could talk with a young Lizzie Borden." I changed the main character to a young girl whose family buys the house and I created a secret room in the basement for them to meet. The whole "friensdship with Lizzie Borden" proved to be too dark for my first set of readers, so I created fictional Lizzie Bellows and lightened the mood considerably.

I was interesting the setting, the southeastern part of Massachusetts near Mount Hope Bay. How did you research that part of the story?

The story is set in the fictional town of Chepstow, across the Taunton River from Fall Fiver. Chepstow is a composite of two "towns across the river," including my hometown. I thought it best to use a fictional setting. Our public library has some great books on Victorian-era Fall River, plus I scoured the internet to ensure historical accuracy about clothing, transportation, speech and even the details of the Slade's Ferry Bridge.

Is there any basis in real life for the legends used in the stories? (I’m thinking of the curse stones in particular.)

The Boston Post cane, given to the oldest living resident of a town, was real. The Fall River Press cane and its legend are fictional. Curse stones do exist, but the history and usage in the book are made up.

Did you read mysteries or ghost stories as a child?

Oddly enough, I didn't enjoy mysteries until I started writing. My childhood goal was to become a sportswriter, so I spent many hours reading bios of famous athletes. I went through a Stephen King phase in college, but mysteries are a recent pleasure.

What are you working on now?

I writing an Alice In Wonderland-type middle grade story about a boy who wonders why all the big clocks in his town have stopped. He gets sucked into a crazy "clock world" where two rival villages battle for control and the only way to solve the conflict it is to find the elusive Tick Tick Man. It's completely different from my other stories and it should be done some time this spring.

Robert, thanks so much for taking the time to stop by Project Mayhem. We’re offering a signed copy of DIZZY MISS LIZZIE as a giveaway. To enter, if you are already following Project Mayhem, just leave a comment. If you aren’t yet following us, join us and then leave a comment.  The deadline to enter is 12:00 A.M. on Tuesday, February 28th, and the winner will be picked in a random drawing. I’ll announce the winner later that day.