The Wolf In the Wardrobe: Review and Interview with New Zealand author Susan Brocker 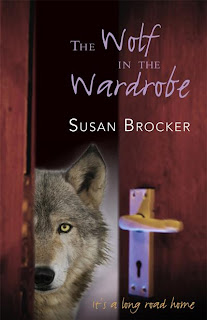 Perhaps I am a total whacko, but I really like wolves (and rats, and spiders, and snakes.) So I jumped at the chance to read New Zealand author Susan Brocker's latest: THE WOLF IN THE WARDROBE.

The story: Finn is an only child whose parents have split. He lives with his mother and ailing grandmother. One day, Finn finds an injured wolf called Lupa, a wolf he first saw being mistreated by a clown during a circus performance. He nurses Lupa back to health, and then tries to keep her from the clown's clutches while doing his best to raise funds to send her to a wolf sanctuary in the United States. The story builds to a highly dramatic climax and has an ending that is poignant and heartfelt.

What I loved: I loved Finn's drive. I loved the humor, particularly from grandma Eva whose mind is failing her, but who retains her Irish vivacity. And I loved all those cool New Zealand words and phrases. Plus the fact that Finn plays rugby, a sport I played in my youth.

Reading THE WOLF IN THE WARDROBE made me want to read all of Susan's books, find out more about her fellow New Zealand writers, and then move to New Zealand. (Oh well, one can but dream regarding the latter.) In lieu of becoming a Kiwi, though, I did the next best thing: interviewed Susan for Project Mayhem. Here's what I learned:

When did you start writing?


I started writing stories when I was a little girl, as soon as I could string sentences together. I guess I was born wanting to tell stories, so I grew up writing and sharing these stories with my friends. My teachers published my first “book” when I was about 9 years old. They typed it up and stapled it together for other students to borrow from the library. It was the tale of a wild Kaimanawa horse (New Zealand’s own wild horses, similar to your mustangs). Over 30 years later my first novel published here in New Zealand, called Restless Sprit, was all about the Kaimanawa wild horses too.


What was your journey to publication?


A very long one, like so many authors. After studying history at University, I travelled extensively overseas and wrote many travel articles about the places I visited. When I finally returned to NZ, I was lucky to get an editing and writing role with a children’s educational publisher in Auckland. From there on my love of children’s books grew. I wrote over fifty educational books during this time, about varying topics such as wildlife conservation, social history, and natural science. When we decided to move from the city to enjoy country life here in Tauranga, I started writing fiction for children about the subjects I love – mainly, animals and history. HarperCollins NZ accepted my first middle grade novel about the wild horses of NZ and since then I’ve gone on to publish five more.


Where is Tauranga, and how would you describe it?


Tauranga is in the Bay of Plenty, on the east coast of the North Island of New Zealand. NZ is made up of two islands, called imaginatively by the Europeans the North Island and the South Island! Tauranga is a beautiful and bustling port city of about 120,000. It’s famous for its glorious surf beaches and year-round sunshine. We live in the foothills overlooking Tauranga, with views out over Mount Maunganui (Mauao), an extinct volcanic cone that features prominently in many Maori legends.


Tell us about some of the animals you live with, and how they inspire you.


We live on a small farm (10 acres), called a lifestyle block here in NZ. This means we don’t make any money from it, but we live here because we love the lifestyle! Both my husband and I work (I’m a fulltime writer), and we enjoy our spare time with the animals. We have our lovely German Shepherd, Yogi, three horses named Barney, Robbie, and Al Capone whom we ride and trek for fun, kittens Luci and Lili, a herd of angora goats (named after desserts and fruits, for example, Cheesecake and Pavlova, and twins Raspberry and Strawberry), and a pet Charolais cow named Bubbles. Many of my stories have been inspired by their antics and zest for life. For example, I’m currently working on a novel about an eccentric woman who rescues cats, inspired by our madcap kittens Lili and Luci..


Is there a kid-lit community in New Zealand? Are there other New Zealand writers you would recommend us reading?


New Zealand has an extremely strong and talented kid-lit community. We have many top children’s writers for all the age levels. I could recommend so many, which is great given the size of our country. Some of our most celebrated authors include Joy Cowley, Margaret Mahy, Tessa Duder, Dame Lynley Dodd, Maurice Gee, David Hill, and Jack Lasenby, but I could go on and on.


I saw on your website that Lupa, the wolf in The Wolf in the Wardrobe, is based on your German Shepherd Yogi. Can you tell us how that idea came about?


Yogi is a longhaired GSD who absolutely adores children. We live next door to a family of boys and as they were growing up they would hang over our fence calling out, “Where’s the wolf? We want to play with the wolf!” To them Yogi looked just like a wolf from the films they’d seen on telly (here in NZ we don’t have any wolves!). This got me thinking one day: imagine if Yogi really was a wolf! Imagine the fun and intrigue…and so slowly the story unfolded of a cheeky boy who hides a wolf pretending she’s a dog. The best thing about the story was that half way through writing it I had the chance to visit Yellowstone National Park and see for myself the wolves I write about in the book. It was a wonderful trip.


My favourite ice-cream (notice my British spelling), is called hokey pokey ice-cream here in NZ. I don’t know if you have that flavour (sp) in the States? A NZ company called Tip Top make it; it’s yummy and the creamiest you’ve ever tasted. When we lived overseas it was something I always missed about home.


Now, as to sport, my personal favourite is horse riding of course. My husband and I go trekking through the bush and along the beaches most weekends. It’s a wonderful and relaxing pastime. However, down here most people are obsessed with the game of rugby. It’s our national sport, and mostly what people play and watch on weekends (both men and women, though women often play a gentler form called touch rugby).


For more info visit my website or join me on my Facebook author page at:
www.susanbrocker.com
http://www.facebook.com/pages/Susan-Brocker-author/123399817739346

Thanks so much, Susan!! Now everyone go dancing with wolves!!

Email ThisBlogThis!Share to TwitterShare to FacebookShare to Pinterest
Labels: book recommendations, Michael Gettel-Gilmartin, Susan Brocker, The Wolf in the Wardrobe