Magic Realism or Fantasy? What's the Difference? by Joy McCullough-Carranza 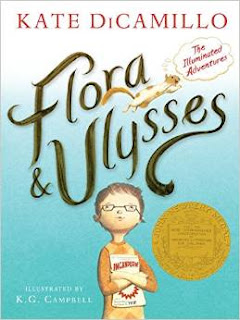 In a recent blog post describing what sort of manuscripts I’d like to work with as a mentor in the Pitchwars contest, I specified that I’d like magic realism, but not fantasy. Immediately I began to get questions. What’s the difference? Why had I said I didn’t want fantasy, but then listed Flora & Ulysses as one of my favorite books? Isn’t that fantasy? After all, squirrels that write poetry on typewriters are pretty fantastical.

So I thought I’d unpack the difference between fantasy and magic realism, as I see it anyway. These terms are fluid, and perhaps it all falls on a spectrum, with completely realistic novels on one side and completely fantastical novels on the other. But I think it’s useful to understand the distinction for a couple reasons. For one thing, it’s not uncommon for agents or editors to say they’re looking for one or the other in their submissions. Agents are extremely unlikely to reject a query because the author has miscategorized their manuscript, and publishers will figure out how to market a book. But on the other hand, a query shines more brightly when the author clearly understands where they fall in the market.

Also, there can be a cultural misunderstanding around the term magic realism. A blog post at Tor.com recounts a well-known author at a convention who referred to “Magic realism—which we all know is just fantasy written by a Latin American author!”

So what is magic realism? For one thing, it’s firmly grounded in the real world, and deals with real people grappling with real world conflicts. The elements of magic are employed (with a light hand) to illuminate those characters and their real world struggles. The magical elements in magic realism do not tend to have rules and systems around how they occur. And they’re usually presented side by side with the realistic elements, as though the magic is completely ordinary (which, in turn, can elevate the ordinary to magical). I love magic realism in MG because I think this is how so many kids live day to day (before their imaginations get squashed, anyway) – magic is ordinary, and the ordinary can be magical.

Fantasy is a really broad category, encompassing a huge array of sub-genres.  We can probably agree that anything that takes place in a completely imagined world populated by fantastical creatures or talking animals or witches and wizards is fantasy. It gets trickier to draw the line when we consider books that are set firmly in this world, but contain magic or supernatural elements. These are often called contemporary fantasies or urban fantasies.

So let’s consider a few different books and decide where they fall. (Feel free to argue in the comments if you think I’m off-base. There aren’t hard rules in all this.)

STORYBOUND by Marissa Burt – A girl in our world opens a magical book and ends up in a completely different world, where she attends a school for fairytale characters. Other elements of note: talking animals, very systematic magic, instructed in a special school. VERDICT: FANTASY

THE EIGHTH DAY by Dianne Salerni – A boy in a world that seems very much like our own discovers he is a rare sort of person who lives in an eight day week, and that some people only exist in the eight-day week, because of a magic spell. Other elements of note: non-human characters like brownies, characters who are descendants from Arthurian legend, some characters have magical powers like the ability to force someone to speak truth, or tell through scent whether someone is magical. VERDICT: FANTASY

CENTAUR RISING by Jane Yolen - Set firmly in the real world in the 1960’s, a farm girl’s horse gives birth to a baby centaur. While the focus of the story is on real world people with real world problems, the presence of the mythological creature, together with the fact that that creature is regarded as extraordinary, all say fantasy to me. VERDICT: FANTASY

THE CABINET OF EARTHS by Anne Nesbet - When I asked Project Mayhem contributors if any of them had written magic realism, Anne Nesbet mentioned that a number of reviewers had called The Cabinet of Earths magic realism. I haven’t read it yet, and would be curious to hear what some who have read it think. In magic realism, the magical is treated as ordinary, and in this book, it sounds like the magic cabinet is seen as quite extraordinary. So I’d lean fantasy, but couldn't say for sure without reading. VERDICT: STILL OUT

DEADWOOD by Kell Andrews - A story firmly grounded in the real world, in which a spirit tree (so named not for mystical reasons, but because messages of school spirit are carved into the trunk) uses text messages to communicate with kids about lifting a curse on their town. I’m looking forward to reading this. It sounds like it could be contemporary fantasy or magic realism, depending on how extraordinary the tree seems to the characters it interacts with. VERDICT: STILL OUT

WHEN THE BUTTERFLIES CAME by Kimberly Griffiths Little – Tara is struggling with her mom’s depression and the death of her grandma when butterflies start to follow her. (Right away, this is a nod to the butterflies that follow a character in the magic realism classic One Hundred Years of Solitude.) The butterflies are there, propelling Tara forward and illuminating her journey, but the focus always stays on Tara’s real world stakes and goals. VERDICT: MAGIC REALISM

To be clear, I don’t believe writers should let genre distinctions color what they’re writing in any way. Tell the story that needs telling in the strongest possible way. And if you write something that defies categories, that's awesome! But in the interest of understanding where your work fits in the market, and targeting the best possible people to help you get it read, it could be helpful to know whether you’re writing fantasy or magical realism.

Do you define magic realism in another way? Do you think I've miscategorized one of the books above? What are some MG titles you consider magic realism?