Holiday Wishes from The Mayhem by Michael Gettel-Gilmartin

It's been a great year for Project Mayhem--since our beginnings in 2010 we've written more than 900 posts! Our love affair with middle grade writing grows ever stronger, and we are so very grateful for all our readers. Please accept our best wishes for the New Year ahead.

Here's a rundown on what some of the Mayhemmers have been up to this year. As you can see, we're a busy bunch.

Caroline: I had two books come out this year (though only one MG): Blue Birds in March and Over in the Wetlands in July.

(Hopeful writers, I'd like you to know I continue to get pretty consistent rejections, too. It's just how this works. :)

After a sea kayaking trip with his father takes a dangerous turn, Tom Parker is stranded on the remote, outer coast of unpopulated Bear Island in the waters of Prince William Sound, Alaska with only a survival kit in his pocket. Desperate to find his father, Tom doesn’t know how long he can survive and must put his survival skills to the test as he fights to reach safety.

“The tension is well-crafted and realistic. Bear Island is a challenging environment to survive but a terrific thrill on the page.”–Kirkus

It is a Junior Library Guild Selection in the High Interest Middle Category for books that will appeal to even the most reluctant middle-school readers. 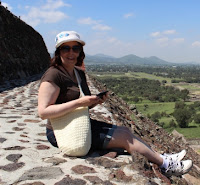 Dianne: I published my fourth book, The Inquisitor's Mark; and The Eighth Day became a finalist for the Sunshine State Young Readers Award in Florida.

Eden:  Book Three of the Young Inventors Guild trilogy. The Strange Round Bird...  (the ellipsis included since I have not decided on the second part of the title!) is due out in 2016.

Bandits Peak: Danger in the Wilderness
While hiking in the mountains, Jesse meets a strange trio. He befriends Maria, but he’s suspicious of the men with her. Still, charmed by Maria, Jesse promises not to tell anyone that he met them. But his new friends have deadly secrets, and Jesse uncovers them. It will take all his wilderness skills, and all his courage, to survive.
Readers who enjoyed Gary Paulsen’s Hatchet will love Bandits Peak. This heart-pounding adventure tale is full of danger and excitement.

I also had three fiction and three nonfiction work for hire books come out in 2015, written as M. M. Eboch. For fiction, the three world adventures for Rourke are Monster Island (Greece), Walking the Dragon's Back (China), and An Artful Adventure (France). The nonfiction titles are Native American Code Talkers, A History of Film, and A History of Television. World War I Battlefield Medicine will come out January 2016.