Some thoughts on Crenshaw by Katherine Applegate (by Paul Greci) 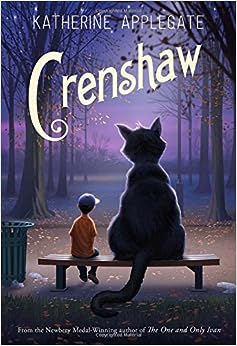 I was intrigued by one of the themes in Crenshaw, families who fall on hard times and find themselves homeless. As someone who has been in the field of education for 25 years I’ve seen this scenario many times.

Two of the many things I loved about Crenshaw were the emotional realism of the main character, and the way we are allowed into his world through his quirky, contagious, voice. Even if homelessness isn’t high your list of topics to read about like it is on mine, you’ll want to read Crenshaw for the voice.

Jackson is still a kid even though he has to deal with things that might make a kid grow up faster than what is ideal, and that comes through in his voice.

The excerpt below is from the beginning of Chapter Two:

“Here’s the thing: I am not an imaginary friend kind of guy.
Seriously. This fall I go into fifth grade. At my age, it’s not good to have a reputation for being crazy.
I like facts. Always have. True stuff. Two-plus-two-equals-four facts. Brussels-sprouts-taste-like-dirty-gym-socks facts.
Okay, maybe that second one’s just an opinion. And anyway, I’ve never eaten a dirty gym sock so I could be wrong.”

From the Jacket Flap:

Jackson and his family have fallen on hard times. There's no more money for rent. And not much for food, either. His parents, his little sister, and their dog may have to live in their minivan. Again.

Crenshaw is a cat. He's large, he's outspoken, and he's imaginary. He has come back into Jackson's life to help him. But is an imaginary friend enough to save this family from losing everything?