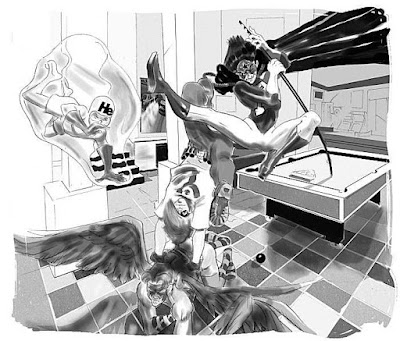 When we hear the word action, our brains may conjure up images of Bruce Willis jumping off the Nakatomi Tower with a fire hose cinched around his waist. Or maybe it’s Stallone, inexplicably slathered in coconut oil, blasting the bad guys with a machine gun. Or possibly Vin Diesel behind the wheel of an expensive sports car, jumping from one Abu Dhabi skyscraper to another.
When it comes to writing middle-grade fiction, action is so much more than fast cars, explosions and corny catch phrases. For many children, the excitement and energy action brings to a story are critical for a successful reading experience. And critical for their transition into lifelong readers.

According to a recent Scholastic survey, American children show a decline in reading for enjoyment after the age of eight. The numbers are troubling. “62 percent of six to eight-year-olds enjoy reading books for fun, but that percentage drops to just 46 percent for kids aged nine to 11”. Why the sudden lack of interest in books? There are several factors, but the survey singled out the fact that parents often stop reading to their children just around the age when kids begin to hear the siren call of electronic devices. But what does this steep drop-off mean for writers? It’s like the old Spider-Man motto says: “With Great Power Comes Great Responsibility.” We are tasked with the privilege of turning children into lifelong readers, and action is one of our most useful tools to get them over that dangerous 8-11 divide.

With a background in sequential art for comics and storyboarding, it should come as no surprise that I love writing action. If writing action is something you struggle with here are a few tips that might help.

1). If you’re writing a book that would be classified as action/adventure, it’s not a bad idea to follow the trend of summer blockbuster movies and start your book off with a gripping action scene. It’s a great way to hook a reader from the get-go. Movies like Jaws, Star Wars, and Raiders of the Lost Ark all started off with a bang (or more accurately a chomp, a pew pew and whatever sound a giant rolling boulder makes—crunch, I guess).

2). Cliffhangers are useful for prodding reluctant readers from chapter to chapter. It may be a tad gimmicky to end every chapter with the character literally hanging off a cliff (or in some form of mortal peril), and I’m not endorsing that approach at all. But we should make effort to reward readers for moving from one chapter to the next. This can be achieved in several ways: A literal life-or-death scenario, the promise of an important reveal, the introduction of a compelling character, the threat of looming danger, a discovery, etc.

3). Action can act as seasoning for otherwise “quiet” moments. For example, in Harry Potter and The Chamber of Secrets, during the scene in Hagrid’s hut when the characters discussed the racist overtones of the word mudblood (one of the most serious and poignant discussions in the entire series), Rowling decided Ron should be belching up slugs into a basin, the victim of a boomeranged charm. In this way, Rowling was able to infuse some levity into an otherwise serious scene. The action was minor but well-placed and purposeful.

4). Onomatopoeia, or words that sound like the action they describe, are never more effective than they are in kid lit. BLAM, KA-POW, SPLAT are as close as writers get to painting a picture with a single word and kids absolutely adore them. Use them early and often.

5). Action doesn’t have to be telegraphed. Writers like Tolkien and Lewis spent hundreds of pages preparing their readers for epic battles, but just like in life, action can come out of nowhere and when you least expect it, and in an instant, can change the course of your story. Earthquakes, car accidents, ninjas… whatever works. If you find your plot is too linear and predictable, don’t be afraid to alter course with action.

6). My last suggestion for enhancing your action chops may seem a little strange, but from my own experience, nothing beats reading comic books to develop a sense of pacing that will resonate with kids. Comics, specifically those in the superhero genre, are typically 22 pages long and writers in the medium naturally develop an innate sense of pacing and a finely tuned balance between drama and action. Now that a single issue of a popular monthly can reach into the $4.00 range, comic book writers must routinely deliver on all fronts or risk losing their readers for good. A well-written comic has all of the elements of a good kids’ book: Compelling drama, strong character development, dynamic action, humor, fun and more, usually capped off with a powerful cliffhanger. That’s a lot to pack into 22 pages, but like soap operas and other serials, comic books have to attract and captivate an audience and keep them coming back for more.
Posted by Robert Lettrick at 4/18/2016