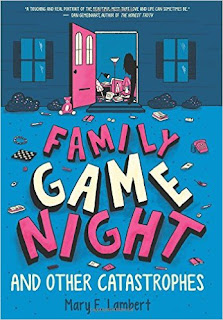 "Annabelle has a five mile rule: She must keep her friends from coming within five miles of her home. That's because Annabelle's mom is a hoarder. Their house is full of stuff: canned goods, broken toys, old newspapers... It's everywhere except for Annabelle's spotless room.

Annabelle can't let anyone find out what her house is like. They'll realize that her mom is crazy. They'll make fun of her. Or feel sorry for her. Or try to help.

But when the newspaper piles come crashing down on her sister's head one morning, it kicks off an epic fight between her parents that ends up with her dad taking off -- and her fix-it-all grandmother stepping in.

As Annabelle realizes how bad things have gotten for her little sister, while trying to navigate her first crush, not to mention stay sane herself, she's forced to come to terms with the fact that maybe she can't keep all her secrets to herself. Maybe she can't just throw her mom's things out... maybe she has to let some people in."

Praise for Family Game Night and Other Catastrophes:

"This poignant tale with an authentic and memorable narrator will resonate with many young readers–whether they have personal experiences with hoarding or not. Move this to the top of the realistic fiction purchase list in libraries serving middle graders."
-- School Library Journal

"Gutsy and affecting. A believably hopeful ending reinforces the story's call to face problems rather than hide or run from them, and to ask for help from others–especially family."
-- Publishers Weekly

"Family Game Night and Other Catastrophes is a heartfelt exploration of family and friendship, adolescence and sisterhood; it is a touching and real portrait of the beautiful mess that love and life can sometimes be."
-- Dan Gemeinhart, author of The Honest Truth


Family Game Night and Other Catastrophes (published in March 2017) is Mary E. Lambert's debut novel. On her website, Mary, a VCFA alumna, writes that she always wanted to write about the complexity of the sister relationship, and that after some suggestions from her graduate program advisors, the idea for this book was born. Mary succeeded in portraying the emotional roller-coaster of not only the relationship between sisters, but also between mothers and daughters. I was fascinated by the component that Annabelle's mom has an out-of-control compulsion to hoard, but more that that, I was profoundly touched by the love that binds this family even though they're facing the worst crisis of their lives. Unlike many other books featuring broken parents, the love that the family members have for each other shines through the page, even when Annabelle's mean to her sister or even her mom. I loved that saving her family is the main desire line of the story, and that Annabelle isn't a traditional heroine in the sense that she solves the family problem. How could she? She's just a kid. But her actions, small when compared to other stories featuring saving the world, send the stone rolling so that her mom can finally get the help she needs. Annabelle's family is her whole world, so true to middle-grade kids. The raw emotion of Annabelle trying to function socially with her friends and the new boy she likes while at the same time she holds this huge secret in her heart make the stakes so high and important.

Annabelles' voice is true middle-grade, full of optimism, but at the same time, her awareness of the family situation makes her sound much more mature than her friends. Her relationship with her friends is another element that I admire of this story. Friendships are so crucial at the age that I was pleasantly surprised that the author gave Annabelle an amazing support group, while at the same time portraying the dynamic among the friends in a realistic and honest way.

The impact of the climax of the story took me by surprise, in the best way possible. Although the story deals with heavy issues (dysfunctional family, sister with anxiety, etc), the narrative is never dark, but there is a sense of contained emotions all the way to the end, when the author executes the conclusion magisterially.