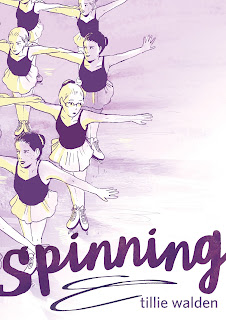 The intense world of competitive figure skating serves as the backdrop of SPINNING, a coming of age graphic memoir by author Tillie Walden. Although this is a YA book, it has much to offer middle grade writers in its recounting of Walden’s early years as a skater who was both fully participating in and yet questioning/resenting the strictures of the life of a competitive skater. The fears of competitions and tests, the tensions within the culture of skating, the grueling schedule of pre-dawn practices: Walden gives us a vivid look inside this world. 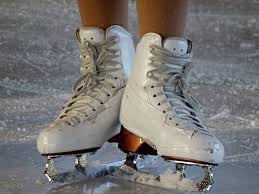 There is another element of the book that I think is superb: the coming out of a young lesbian. Through Walden’s skillful narrative, we see that Tillie knew she was attracted to girls/women at a young age. This is woven into the story as she moves through her middle school years and has a relationship with her first girlfriend. In a passage that speaks to PB, middle grade and YA writers, Walden discusses this in an interview with YA Pride:

It’s rare to see underage female desire depicted in literature. It’s often desexualized to appear more innocent. In Spinning you recount early memories of realizing you are a lesbian that feel very honest. Were you conscious of this while making the book?

It is rare! That drives me crazy too. As if kids feel no sexual desire, what bs. I was very conscious that I was putting that in SPINNING. I really wanted it in there. I wanted people to know that I felt desire towards women and girls at the age of 6. I never understood why feeling that way would make people think I was less innocent. Of course I was innocent, I was 6! It was an innocent kind of love. Just because I was too young to have the words to explain how I felt doesn’t mean that I didn’t feel it. People are so afraid of sexuality, especially when it creeps into the LGBTQ spectrum. I want to wash that fear away, and I want kids to know that its normal to have desires.

You can read the rest of this excellent interview here. Thank you, YA Pride! 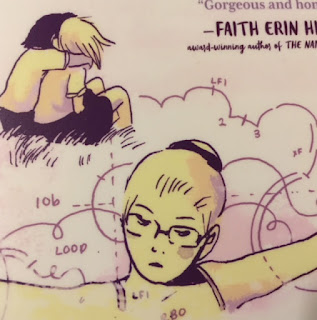 A peek at the back cover of SPINNING

Finally, there is another element that will spark conversation and ruminations among young readers, and fodder for middle grade writers: how an athlete can spend years immersed in practice, competition, and the culture of a sport... and then decide to walk away from it. This tension between being really good at something and beginning to doubt its core principles could apply to young athletes, dancers, or thespians. How those cracks progress, how Walden’s critical thinking about figure skating develops, will provide food for thought for many, many readers. 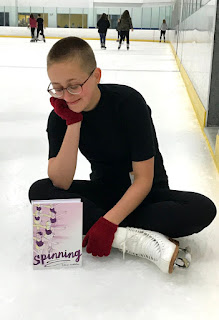 SPINNING is an important book that will speak to many readers. You can listen to a wonderfully in-depth interview with Tillie Walden on the All the Wonders podcast, hosted by Matthew Winner, episode 400.

From the Macmillan website:
Ignatz Award winner Tillie Walden’s powerful graphic memoir Spinning captures what it’s like to come of age, come out, and come to terms with leaving behind everything you used to know.