Some Thoughts on Art, Selfishness, and the Sinking Ship, by Anne Nesbet

I have just finished the draft of a new book, and so I am somewhat breathless and on tenterhooks. Or maybe this is a better way to describe my current state: somewhere in between sobbing with relief and trembling with fond worry (what will come of this story? will it be okay?).


While writing this draft, I have also been watching myself write the draft--the way the story begins to take everything over--and so, as I became more consumed by the work & its world, I found myself mulling over a perhaps surprising question: selfishness. Is it selfish to make art? Is writing necessarily selfish?

You know, I flinch even writing that word, "selfish"! I think that is partly because as a female person growing up in North America, I have been carefully raised to think that selfishness is a pretty terrible thing--maybe just about the worst thing ever. I want to be a good person! I am someone who highly values selflessness and self-sacrifice; I try hard not to be selfish, generally speaking. The focus that writing a book requires therefore makes my well-trained and opposed-to-selfishness self uneasy.

Think about it. The very language we use to talk about writing (those of us who aren't full-time writers--or those of us who have families to take care of) is telling: we "steal time," or we "sneak in some words." Lurking in these phrases is the idea that we are somehow cheating when we write--cheating our day jobs or our children or our friends out of time and attention that rightfully belong to them.

But is that even true? A strange thing happens to me when I am not writing (or editing or working in some way on a creative project): I diminish. I am less alive. If the not-writing goes on too long, I start slipping into the mire. And I assure you that the version of myself that is Anne-in-a-mire is not a better teacher nor a better mother nor even a better friend than the Writing Anne. So then the question of selfishness begins to look a little different: perhaps it is actually all right to want to be alive in the way I am alive when I am working.

(I also suspect that the focus and determination that writing a novel takes are less often seen as selfish when it's a man doing the focusing and the writing. We tend to think of women's primary responsibilities as being to other people--not to creative projects. Or perhaps the difference is that the accusation of "selfishness" is less negative for a male writer than for a female writer. I would be interested to hear what the men in the room think about this: does creative work feel like a selfish activity? And how bad does it feel to be selfish?)

But there's another side to this problem, and that is that writing--however selfish an activity it may seem from the outside looking in--is actually not about me, not mostly. It is about saving the life of a story.

Because here's the thing: I am a sinking ship! (I am not unique in my sinking, of course; we all are taking on water, to one degree or another.) Therefore writing feels very urgent to me; it is the only way to get that particular story off the sinking ship before it goes under. When I complete a draft, I am desperately swinging a story over the rails into a lifeboat: now it has a chance.

Of course I don't know what will become of that particular lifeboat. Some are still eddying around the Sinking Ship; some will undoubtedly be lost at sea. But if the story isn't written--if I haven't gotten it into the lifeboat to start with--it can't be picked up by a passing steamer, can it? It can't be rescued and fed warming soups and taken back to New York Harbor and published and read by future children by flashlight.

So I want to encourage us all to figure out what most needs to be rescued from our sinking ships--and to get those stories, those paintings, those songs into the lifeboats while we still can. If the world hisses a sibilant "selfish" in our direction, up to us to stand tall (at least sometimes) and say, "Rescue Mission!" Let us think of this as the urgent work it is: saving the life of a story.

And I tell you a secret you may already know: sometimes saving the story just happens to save the writer, too. 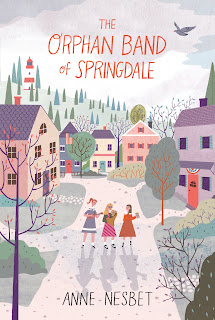