Awards? A Letter About Being Kind To Yourselves, Oh You Lovely Longlisters, by Anne Nesbet

Dear friends who have ever hoped-against-hope for something wonderful to happen,

Yes, it's true: another awards season is upon us! Not just for children's book writers, but oh definitely for us, too: The "Youth Media Awards" (which include the Newbery Medal and the Caldecott Medal and a number of other lovely honors) will be presented at 8 a.m. Mountain Time next Monday, February 12th. 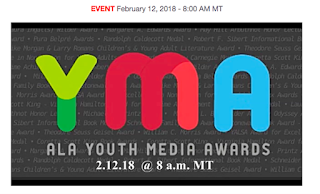 Many of us set our alarm clocks early every year so we can follow the livestreaming event--it's so exciting! A morning when children's books get to be cheered and adored! A morning when a few talented and hard-working and creative and fortunate writers get phone calls that mean their lives will change. Their books will live (approximately) forever. They will be allowed to write more stories for more children. It's that moment when hungry Charlie Bucket peels the wrapper back on his chocolate and there, unbelievably, is the golden ticket, after all: his life is going to be magical now. He will not be hungry, ever again.

[NOTE: In the real world, we know, even a golden ticket does not actually guarantee happiness forever; Newbery medalists--being lovely, vulnerable human beings like the rest of us--still have all the ups and downs of life to wade through; we send them love and fortitude.]

But right now I want to hold a hand out to a pretty large crowd: the future also-rans. You do not have to 'fess up to being in this demographic, but I know you are out there in surprisingly large numbers, and perhaps feeling surprisingly Alone.

Let's start with the people who have had the uncomfortable spotlight on them for a while. These are the writers whose books have benefited from all sorts of buzz, who have the curse of being called "frontrunners" by people with clout--I'm sending courage and compassion to you, dear frontrunners. It's wonderful to have created books so powerful and eloquent and beautiful that many readers are willing to say out loud: THIS ONE SHOULD WIN! But expectations are a jacket with a very scratchy lining, because here's the thing: even most "frontrunners" don't actually win. Those beloved books will still be as absolutely marvelous on February 13th as they were on February 11th, but it's hard to come that close to awards glory and miss. Yikes! Of course it is.

And guess what? I will share a secret truth: It's not only frontrunners who find themselves putting on that Scratchy Jacket of Hope. Human beings being what human beings are, there are many other people suffering right now from unreasonable hopes that (believe me) they are trying very hard to ignore or to repress.

My heart really truly goes out to you, too, whoever you secretly are:

Maybe your book made it onto some long "awards prediction" lists--or a couple of schools put your book on their Mock Newbery bookshelves--or someone mentioned your novel in the comments somewhere as "a book I wish had a chance, even though I know it probably doesn't." My friends, it doesn't take much to infect us with hope.

And if you have ever been infected with hope for something unlikely but life-transformingly amazing--you know how much pain is involved.

Let's say you are an utterly rational person (or mostly so). Let's say that you figure, in your utterly rational way, that you have a 1% to 5% chance of being called with good news in the wee Monday hours. Let's say that you are rather proud of how rationally you calculated those odds, and how well your rational brain did the follow-up subtraction sum that tells you that in 95% or 99% of possible timelines in the multiverse, your book does not win a thing.

Odds are, my dear, rational friends, that more than half of you will still find yourselves awake at four in the morning, listening to the silence--

and perhaps you will even be *despising yourself* for being awake--

because perhaps then you will find yourself not merely feeling the ordinary, understandable disappointment of not winning something that really would have changed your life, but also feeling the extra pain that we can inflict on ourselves, as punishment for hoping. It was so STUPID and UNCOOL to have hoped for a moment (we think)! And then we beat ourselves up! And then we suffer more!

And to whom are you going to confess that you're in pain? The people who love you but aren't in the writing world won't entirely understand what this thing that didn't happen would have meant--and it's downright embarrassing to confess to people in the writing world that you hoped for.....--no, aaaaaaaaargh, you're ashamed even to say it! THE OTHER BOOKS WERE ALL SO WONDERFUL! You know that! You read them all! You don't want a single one of them dethroned! You just wish the list could have magically expanded an extra inch to include--oh, ugh, you can't say it----------and so you writhe on your own.

Dear involuntarily hopeful friends! This is what I promised myself exactly a year ago that I would come here today to say: It is not your fault. Also: you are not alone.

It is not your fault. You are a good person, despite accidentally hoping for something unreasonably wonderful to happen.

And you are not alone. The reason this unreasonable hope took hold of you so hard (despite your trying SO valiantly not to let that happen--I know you really tried) is because this whole business of writing books is deeply unreasonable, in certain respects. You dream of a sticker on your book, because then your book will live! And you will be able to treat this writing career as an actual career, which is probably something you long for.

Why, after all, should it take having your book officially termed the Best (or one of the three or four or five Best), for you to have a career as a writer? I actually had an argument with someone in a dream the other night about this problem. I said, in my dream, "The children's books business is so weird! Let's think of it in terms of Mechanical Engineering! Wouldn't it be absurd if only FIVE or TEN Mechanical Engineers in this country could actually make a living doing Mechanical Engineering, and all the rest of the Mechanical Engineers had to have other careers (or sources of support) to pay the bills, while they do full-time Engineering on the side for almost no money???"

(When I woke up, I thought that was actually surprisingly logical, for a dream argument.)

I'm saying, dear longlisters: your unreasonable longing for something wonderful to happen for your book and your writing life is actually completely reasonable and understandable.

Don't beat yourself up for hoping.

We're people, and hope is one of those things people do.

Your hope is a symptom of loving the work you do and loving the children who need books to read, books that can reach out to them and comfort them and challenge them and show them new worlds or reflect their own wonderful, sometimes difficult world back at them in a new and loving light.

You are not alone, and your stories help others feel less alone.

Thank you for what you do, brave writers.  You weather so much, and you work so hard. Even when despair or hope get their claws into you, you keep plowing on and keep writing.

What can I say? You're all winners in my book--whether or not your books are officially "winners."