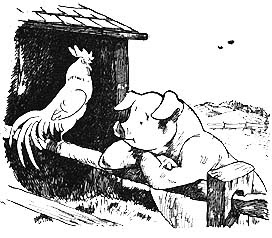 "Don't sweat the small stuff" is great advice for life in general, but not so much for writers. When I'm reading in my favorite genre—middle grade—I pay attention to a lot of crazy little things. For my posts for Project MG Mayhem, I've decided to share some of the things I've figured out in my forays on the page. Most of it concerns small stuff that matters to me. I call it "Reading Helps Me Figure Stuff Out," and this is Part One, "How I Feel About Talking Animals."
Many of my favorite books feature talking animals. In C.S. Lewis's magical series, Narnia's talking beasts are considered akin to humankind, and it is sacrilege to eat them, though everyone gladly munches down on their non-speaking brethren in countless carnivorous feasts. Freddy the pig delights me to no end with his homespun banter in the books by Walter R. Brooks (the picture of Freddy above, by illustrator Kurt Wiese, is from Freddy's home pen...uh, page).
Freddy is a lazy pig at heart, and in Freddy and Simon the Dictator he wrote a bill to be brought up before the State Legislature, which would do away with all schools. But he's also a poet ("Hark/while I croon a verse/in praise/of the universe" is the start of an ode he composed in Freddy and the Spaceship), and so it is no surprise that he is able to speak his mind so well. He lives on Mr. Bean's farm, where all the animals talk up a storm except for the insects, yet Freddy still shows compassion for them (though, as in Narnia, the pesky impulse to devour the non-verbal is at play). When he was half-heartedly attempting a "grasshopper diet" in Freddy Rides Again (Freddy doesn't realize it's the exercise involved in trying to catch the grasshoppers that purportedly makes you thin), he says, "I did catch one. But when it came to eating him...well, you know he looked up at me with such a pathetic expression on his little face—well, I couldn't. Those big mournful eyes—"
This just melts my heart. It's so sweet! I love it whenever Freddy opens his yap.
So it's clear to me that, as a reader, I welcome animals with the gift of gab with open arms. Recently, however, I came across an example of animal "speech" that had me stumped. It came from author Jeanne Birdsall's The Penderwicks on Gardam Street, and it went like this:
"Woof," he said sadly.
The animal "speaker" is Hound, the Penderwick's dog, and he is sad for reasons I will not get in to. But this was what confused me: did Hound say "Woof", or did he woof? Did he make a sound, or did he form a word? Could he say a sound? Can anyone?
Before I go any further, I want to make it clear that I yield to no one in my admiration for this book. Jeanne Birdsall writes like a dream, and the world she created is one I could happily live in forever. The Penderwick sisters are all super smart and quirky and fun, and their father talks in Latin, of all things, unlike anyone I've ever known. However, I am a relentless nitpicker about certain things and when Hound unexpectedly piped up in quotation marks on page 106, it made me pause and took me out of the story a bit. I couldn't help but wonder, why the quotation marks? Does a dog say "Bark", or does a dog bark? When a dog barks in quotation marks, is it saying something more than "bark"? If so, what? I'll never know if all I read is "Bark." I don't speak in dog, which makes me sad too. Hound, move over.
Would I have written the sentence "Hound woofed sadly" instead? I think so, if only to spare myself the mental agony of wondering how much exactly Hound had on his mind.

The pack of timber wolves that adopts Callum in the Wild in my book The Boy Who Howled are not talking animals. They do speak in quotation marks, but only in the sense that Callum imagines what they're saying, as determined by the way he interprets their body language. They speak because Callum gives them something to say.
"My poor little Pig Face," the wolf he calls Mom seems to say, nudging him gently with her freezing wet snout. "My poor little Salty Lollipop."
When Hound said "Woof" instead of woofed, it made me want to hear more from him, in English, not dog noises (or Latin!). And I think I felt that way entirely because of the author's use of quotation marks. Of course, Jeanne Birdsall is far too talented a writer not to convey the gist of Hound's meaning. I got what she intended him to say by the way he said it: sadly. He just meant "I am sad." But if Batty, the youngest Penderwick and Hound's closest ally, had interpreted for him a la Callum, I would have been grateful, because I'm sure she would have gotten more out of him. Hound's "Woof" was left to speak for itself, and so it said everything...and nothing...to me.
So here's how I feel about talking animals (finally!). If they're going to speak, having something to say is what I want and expect from them. In L. Frank Baum's Tik-Tok of Oz, it suddenly occurs to Dorothy that every animal is able to talk once it gets to Oz, but Toto hasn't said a single word so far, and it puzzles her. She thinks it's because he's a Kansas dog and not like fairy animals. The princess Ozma informs her that Toto is a wise little dog and while he knows everything that is said to him he prefers not to talk.
Perhaps the reason he doesn't pipe up is that he has nothing to say. If so, Toto proves once again that he is more than a wise little dog. Toto is godhead!
by Timothy Power. The Boy Who Howled, a Fall 2010 Junior Library Guild selection, will be released October 26, 2010 by Bloomsbury USA Children's Books.
Posted by Timothy Power at 9/07/2010