So not only is super-cool middle-grade author Hillary Homzie here to give us an interview today--we also have a fabulous giveaway of an autographed copy of her latest middle-grade novel, The Hot List. All you have to do to enter is be a follower of Project Mayhem and leave a comment below.

Hillary is the author of the middle-grade novels The Hot List (S&S 2011) and Things Are Gonna Get Ugly (S&S 2009), as well as the comedic chapter book series Alien Clones From Outer Space (S&S), which is being made into an animated television series. During the summers, Hillary teaches in the graduate program in children’s writing at Hollins University. A former sketch comedy performer in NYC, Hillary currently lives with her family in Northern California. Visit her online at http://hillaryhomzie.com/


PM: You have two middle-grade books out, Things Are Gonna Get Ugly and The Hot List. Can you tell us a little about them? 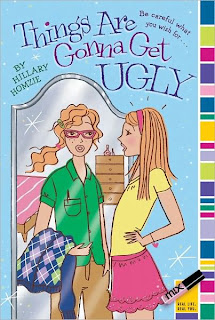 HH: Things Are Gonna Get Ugly (Simon & Schuster/ Aladdin MIX 2009) is about Ernestine Smith who, when she moves from Pennsylvania to California after fifth grade, decides to restyle herself from a book-loving, studious and rather withdrawn self-described geek into Taffeta, who’s obsessively into style, appearances and definitely not her schoolwork. This transformation is so successful that Taffeta forgets all about her former self until the day that she cheats on a math test in Mr. Dribble’s algebra class. He tells her that instead of giving her a bad grade, he can give her a “fresh start.” Of course, Taffeta’s all over that idea since, if she flunks her test she won’t be able to go to the school dance and her mom would probably cancel her birthday party. However, it ends up not being the fresh start that Taffeta had imagined. She finds herself turned back into Ernestine, her former self. It’s as if she never was Taffeta at all. And suddenly, she’s friends with all of the kids that she, as Taffeta, had been judging. And, worst of all, she’s in all of these academic classes, including—ack—orchestra! She can only become Taffeta again if she can convince Winslow Fromes, the king of the nerds, to dance with her at the upcoming dance. No easy task. In this book, Taffeta learns who she really is and what’s important. Think of it like a middle school version of Freaky Friday, except she’s turning into a parallel version of herself. You can watch the book trailer at http://www.youtube.com/watch?v=umt60_KXrpA 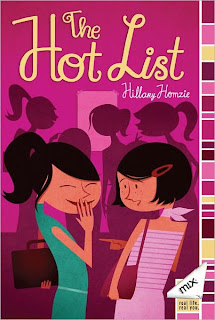 The Hot List (Simon & Schuster, Aladdin MIX March, 2011), my newest book, is about Sophie Fanuchi, who’s absolutely best-best friends with Maddie Chen all the way through the sixth grade. But something happens at the beginning of seventh grade. Suddenly, Maddie doesn’t want to have an exclusive best friend. She wants to widen her social circle and be a part of a large girl group. And chiefly, Maddie wants to be friends with funky and opinionated Nia, whose mother just happens to be dating Sophie’s father. Ug. Sophie desperately tries to think of something cool to reel back in her best friend, so she starts the hot list, a repository of all the boys and girls and girls who socially rank. The list soon spirals out of control, leaving Sophie all alone. She thinks the list is quite ridiculous and ends up betting Nia that she can get even the least hot worthy boy onto the list –Squid Rodriquez.
The Hot List is all about what it’s like to lose your best friend with a little bit of a My Fair Lady plot thrown in, but with a definite surprise twist at the end. For a taste of the book, here’s the book trailer: http://www.youtube.com/watch?v=0YlGYtu8LmQ

PM: What inspired you to write your books?

HH: I was inspired to write Things Are Gonna Ugly because of a memory. The summer after seventh grade we moved from Virginia to California, and I remember deciding that I was going to transform myself into this cool girl. Someone who didn’t have her head buried in a fantasy book. Someone who knew how to dress and didn’t sound too smart. Bad idea, right? Well, for four miserable months, I somewhat succeeded. I wasn’t cool exactly, but I wasn’t a nerd. I ate with these really boring girls who had nice hair but nothing to say. They weren’t mean and I don’t want to speak poorly of them, but we had nothing in common. They just were happy that they weren’t part of the nerdy loser bunch. Yes, at this middle school the bookish kids were called losers. Very sad. Somewhere in the middle of December, I couldn’t stand it anymore and I joined up with the nerds and I couldn’t have been happier. So, emotionally, in Things Are Gonna Get Ugly, I wrote about that experience. Of course, Taffeta is not me, but a huge exaggeration of who I wanted to be. Also, I wanted to respond to the recession. There were a lot of kids who were used to their identity being wrapped up in what they could afford—sort of buying their image through clothes and what kind of car their parents drove. So, I wanted Taffeta to experience an economic loss and cope with that—the economic downturn can be a gift in that it forces reassessment.

I chose to write The Hot List because I wanted to explore those shifts in girl friendships that happen in middle school. Suddenly, all of the rules that applied in elementary school are thrown out of the window. The girls you once sat with in fifth grade, or even sixth, are branching out and finding new friends, and it can be very painful. Where kids sit in the cafeteria definitely reflects the status of their various friendships. In middle school, I remember having to deal with expanding my own friendship circle and having my best friends wanting to de-intensify our friendships. That was hard stuff. And I also love the Pygmalion/My Fairy Lady story so I wanted to throw that in there. But I wanted to do with a twist. What if the person being transformed was better off in their former state? I thought that was a question worth posing.

PM: Why did you choose to write middle grade?

HH: For some reason, I can remember what’s like to be 9 through about 13 really well. It’s like I never—at least emotionally—left that phase. For me, it’s much harder to remember high school, although I really do love YA, but I must admit that it’s more of a struggle for me to visit that era. I feel like I just stepped off the middle school bus. Really! Maybe it’s because it’s such a dynamic period of time. I feel like I learned so much about myself, even though the journey wasn’t always so easy. That’s an understatement, probably.

PM: Please tell us a bit about your journey to publication.

HH: Well, let’s see. I was working as a radio journalist and interviewed a children’s author, and I had this really strange and strong feeling—I don’t want to be interviewing this woman. I want to be this woman. So a couple of years later, a friend, the amazing author Mei Ng, suggested, well, she didn’t suggest she brought me the City College catalogue and said, “You’re taking this!” It was a class on children’s writing with author Pamela Laskin. I wrote a short story in that class and Pam recommend I send it to Teen Magazine and they published it! I was astounded, amazed, and thrilled. Then I spent the next few years learning how to write longer books. I wrote lots of books that I’m never going to show anybody. My first contract for a book was a non-fiction project. I had been volunteering for SCBWI in Pennsylvania, and Susan Campbell Bartoletti had too many contracts on her hands and asked me if I wanted one. Oh, boy, does it pay to volunteer. Of course, I said YES! I’ll always be grateful to her for that. I also worked hard revising manuscripts in my critique group and, during the summer, I took classes at Hollins University Graduate Program in Children’s Literature and Writing (http://www.hollins.edu/grad/childlit/childlit.htm). Shortly after that, I got a contract for a chapter book series, Alien Clones From Outer Space (Simon & Schuster, Aladdin Books). There’s been ups and downs since then. But mostly gratitude. I really love the children’s book world so much.

PM: What advice do you have for writers interested in writing for middle-grade readers?

HH: Oh, Dawn, that’s such a good question. I think it’s a combination of a few things. First, I’d recommend that they read, read, read to internalize the forms so that when they write, some of the architecture of the novel is already embedded into their soft tissue. This means that when you sit down to write your novel, some things are going to happen at a subconscious level. My good friend and colleague at Hollins University, the middle grade author A.Lafye, calls this “the primed mind.” I just love that term. The next thing, of course, is to write regularly. Even if it’s just 30 minutes a day. In a year’s time you’ll easily get a first draft done. Then, when you’re ready to revise, that’s the time to bring in the critical part of your brain and move things around, prune away liberally and add delicious sensory details. But the first go-round just get it all down on paper, even if it’s very messy and rough.


That’s my advice. Oh, and one more thing. Please, find a supportive network of other writers who will support you through the process. You can do this virtually and you can do this real time by joining groups like SCBWI and creating your own writing support group by posting notices at your local library or independent bookstore or online. Reading blogs, like this one, and leaving comments is a great place to meet like-minded individuals who will support you on your journey. I also think it’s not a bad idea to sign up for a writing class (once again this can be online or at a college). There are some really fantastic programs out there. Hollins University and Vermont College MFA programs are a couple, just to name a few. But the truth is, you don’t need a MFA program to be a writer. You need to read, write, and find others who believe in you and, most importantly, believe in yourself. Thanks so much for interviewing me today, Dawn! I had so much fun!
Many thanks to Hillary! And don't forget to comment for a chance to win an autographed copy of The Hot List. We'll do a random drawing in one week.
-Dawn Lairamore
Posted by Dawn Lairamore at 4/25/2011