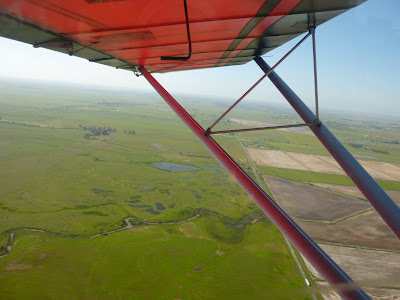 Not too far from where I live, a little two-lane road shoots away from town. There's not a lot out here except the occasional farmhouse and a cow or two. The only reason most people take this road is that, several miles out, it connects to a major highway. And it's because of my occasional jaunts to and from the highway that I know about the grassy little airstrip that makes its home out here. Often you'll see little planes parked in the grass. One of the hangers has a website address painted on the side in neat white letters. It's from this website I learn that the little planes are ultralights, and that the owner of the airstrip gives piloting lessons as well as introductory flights for the curious. I'm curious. I'm also scared of heights. So it takes me years to finally work up the nerve, this spring, to e-mail the owner to schedule a flight.

By the time I actually drive out to the airstrip a week later, I'm pretty nervous. Did I mention I’m afraid of heights?
I'm met by a pleasant middle-aged gentleman in a blue windbreaker. "Nice to meet you. I'm Ray," he says, shaking my hand. "I'll be taking you up in one of our planes today."


"I'm scared of heights," I blurt out.
Ray doesn't seem too concerned. "I take up a lot of people who are scared of heights. It's not so bad. It's different in a plane, even one as small as this."

And the plane is small. It doesn't have a door, just a large plexiglass window that stretches almost to the floor of the cockpit, right next to the passenger seat where yours truly will be sitting. This means I'll have a distressingly good view all the way down to the ground, far...far...far...below.

"We'll only be going up about a thousand feet today," says Ray.

I think he means this to be reassuring. But what I'm actually thinking is, ONE THOUSAND FEET!!! In a plane barely bigger than my car?! 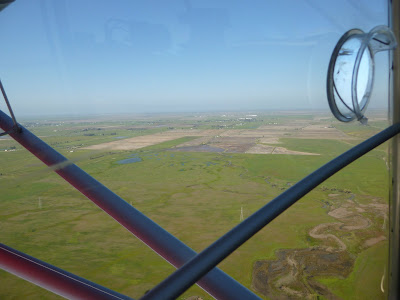 I think about turning tail and running, but five minutes later I'm strapped into the tiny cockpit. We’re cruising down the grassy runway, and Ray's angled the plane so we can "take off with the wind." The nose of plane tilts upward, and we're up in the air.
"Is there something I can hold on to?" I ask through the radio headset.


"There a metal bar over your head," says Ray, as we climb higher. "But you won't need it. It's a very smooth ride."
He doesn't understand. I'm not worried about it being a bumpy ride. I'm a bundle of nerves, and I want something to hold on to for dear life.

Then I see the view.

"Do you want to steer the plane?" asks Ray.


"No!!!" But I do let go of the metal bar long enough to start snapping pictures with my camera. Because it’s really pretty. I knew there was farmland out here, of course, but I can see now that it stretches north all the way to the horizon. The ground is silver and marshy from all the recent rain. Ray dips the plane low along a tree-lined river, so we can look for wildlife. 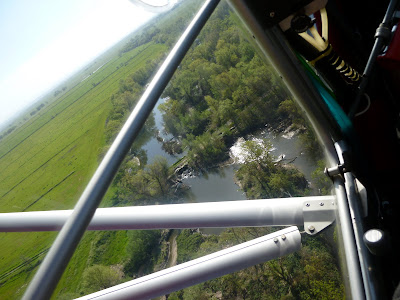 "Is there much wildlife out here?" I ask.
"Oh sure," he says. "Deer, coyotes—look, there are some wild turkeys along the river bank!" (For the record, wild turkeys look about the size of pencil erasures from the air.)
"I had no idea any of this was out here," I say, a bit embarrassed. I've lived in the area a long time, but I guess I don't get out of town much.


"A lot of people don't," says Ray.
I know what he means. Most people probably never go beyond the little road to the highway. The view is completely different from up here.
A fresh perspective can make such a difference. Perhaps that’s why some of my favorite writing tips involve playing with perspective and shaking things up a bit. Here’s a few:

Write the Opposite of Your Ending—or Any Other Scene You’re Struggling With
Endings can be tough to write. So can significant or particularly emotional scenes. The next time you’re struggling with a scene, try writing the opposite of it. Want to give your story a happy ending where the hero and heroine defeat the villain and live happily ever after? Write an ending where the villain wins, the hero and heroine go their separate ways, and everyone ends up miserable. I’m not saying you should actually use this ending in your final manuscript, of course, but it’s a great writing exercise that gets the juices flowing and often stirs up inspiration for the right way to do the scene. Think of it as How Not to Write an Ending.
Write from a Different Point of View
Write that key scene you’ve been struggling with from the villain’s point of view instead of the hero’s, or from a secondary character’s point of view instead of the main character’s, etc. Again, you don’t actually have to use the scene you come up with. But you may be surprised at the insights it provides—how other characters view the main character or the situation, what various characters’ motivations are, etc. It can be a very eye-opening experience. You may even discover some things you didn’t know about your characters.
Write a Scene in which a Character Does the Uncharacteristic
I believe it’s Donald Maass who advises writers to think of something their character would never do—and then write a scene where the character does just that. He reports that many writers actually end up using such a scene in their final manuscripts. Just think of the possibilities—how desperate must the character be, how altered must their mindset have become, for them to be pushed into an action fundamentally unlike them. What a fabulous way to add tension and challenge to your character’s story!
Back at the grassy little airstrip, after Ray lands the plane, I have to admit I’ve had an enjoyable time, even with all my jitters.
“It’s good you came,” he says. “It’s good to push yourself to have new adventures from time to time.”
Have fun on your writing adventures today. Don’t be afraid to leave the road.
-Dawn Lairamore
Posted by Dawn Lairamore at 5/23/2011