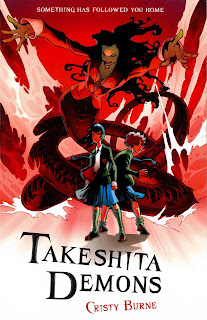 
Summary from Publisher:
Miku Takeshita and her family have moved from Japan to live in the UK, but unfortunately the family's enemy demons have followed them… Miku knows she's in trouble when her new supply teacher turns out to be a Nukekubi - a bloodthirsty demon who can turn into a flying head and whose favourite snack is children. That night, in a raging snowstorm, Miku's little brother Kazu is kidnapped by the demons, and then it's up to Miku and her friend Cait to get him back. The girls break into their snow-locked school, confronting the dragon-like Woman of the Wet, and outwitting the faceless Nopera-bo. At last they come face to face with the Nukekubi itself - but will they be in time to save Kazu?
My Thoughts:
This book was a lightning fast read and will appeal to kids who like anything creepy or Manga. The line at the top of the cover, SOMETHING HAS FOLLOWED YOU HOME, to the last line of the book we'll keep you'll be pulled in. They great thing about this book, kids will learn from it! There is lots of history on the Japanese Yokai (demons) and even a little history and glossary in the back of the book, provided by Cristy Burne, the author. The stylish illustrations by Siku are sure to draw kids in, along with the text, which is straight forward and easy to understand, even with the wealth of Japanese mythology within.
This book is also about two girls who kick demon backside, which is awesome! So, this is also a great way to dispel the myth that girls need boys to protect them! Not in this book!
Given how quick this book reads, this is highly recommended for the reluctant reader set. It's something they can read in a few sittings and not get bored! They may even want to pick it up without you bugging them, though they might want to hug their teddy bear...just a little anyway. 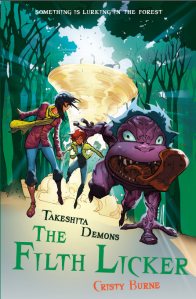 Also, look for the sequel, Takeshita Demons, THE FILTH LICKER, available now, but only in the UK!
Posted by Hilary Wagner at 6/06/2011