A couple weeks ago the temperature dipped to 40 below. Yeah, our first cold snap of the season came early and broke a bunch of low temperature records.
I love exercising outside. I’ve been running and biking at forty below and colder, but sometimes it’s hard to get motivated to get out the door when it is that cold. I had to do something, so I decided to go for a short walk.
I’d been walking for about ten minutes when I heard footsteps behind me. It was my neighbor. My eighty-two year-old neighbor. Running. 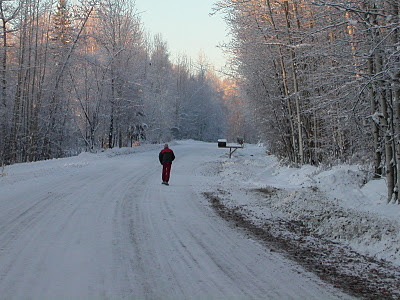 He doesn’t run fast, and he’s always a little hunched over, but he runs every day. It doesn’t matter how hot or cold or snowy or rainy it is—he runs.
We’ve exchanged a few words over the eleven years I’ve lived in the neighborhood, but mostly we just wave at each other. I know he started running relatively late in life, after being very ill.
A day rarely passes when I don’t think about him. He’s an everyday hero who inspires me to keep pushing myself in all areas of my life. I’ve told all my friends and family, near and far, about him.
Even though I barely know him, I am thankful that he's in my life.
Do you have any everyday heroes in your life who rock your world?
Happy Thanksgiving!!
Posted by Paul Greci at 11/25/2011