Review and Giveaway of THE DEATH OF YORIK MORTWELL! 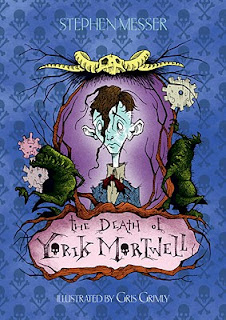 Okay, so anyone who knows me or my writing knows I'm a huge fan of creepy, so when I was sent a copy of THE DEATH OF YORIK MORTWELL, by Stephen Messer, I was entirely thrilled!
I've always been a fan of the "underdog", and well, you can't get more underdog than poor Yorik, a little servant boy whose life is taken when he's purposefully hit by a rock by a spoiled rich boy who lives in the manor he serves at. Even in death, poor Yorik doesn't have it good. Once again he's a servant to a Princess who wants him to spy on the manor.
I'm not going to give too much away, but this story has many twists and turns, wonderfully fascinating characters, and let's just says our hero, Yorik, learns some important lessons about life (in death), and by the end of the book he realizes he doesn't need to serve anyone anymore.
So you have this beautiful macabre story by Messer, along with the fantastic illustrations of the one and only Gris Grimly! All combined this makes for a fantastically creepy-rific novel and I'm a little sad to have to give away this lovely signed hardcover, but hopefully it will go to a good home.
Things of note: This book is a quick read, coming in at 175 pages, so if you know any children daunted by huge books, this compact novel won't scare them away. The book takes place in the Victorian age, but never fear, the prose are very attainable to all levels of readers. Readers who like a touch of creepy (think Tim Burton, not Wes Craven) should really enjoy this book.
Here is what the School Library Journal had to say about The Death of Yorik Mortwell:
Gr 5 8—When spoiled Master Thomas of Ravenby Manor throws a rock at orphaned servant Yorik Mortwell, the 12-year-old falls from a tree and dies. Now a ghost, Yorik quickly acquires a new master, the Princess of the Aviary Glade, who demands that he haunt Ravenby—"You're a ghost and you've got to haunt something"—and to spy on it. Upon returning to the estate, Yorik goes in search of his servant sister, Susan. He encounters a pack of demon-hounds, Master Thomas, and the Yglhfm, evil Dark Ones that sit on shoulders whispering and wreaking havoc. Yorik must find how to defeat them. Full-page, macabre illustrations appear throughout. Lemony Snicket, Harry Potter, and Neil Gaiman enthusiasts will appreciate this engaging, eccentric adventure.—Krista Welz, North Bergen Public Library, NJ
To learn more about Stephen Messer and his books, please visit his website and check out the interview Team Member Dawn Lariamore had with Stephen last year, talking about his debut novel WINDBLOWNE, which garnered fantastic reviews!
To enter the The Death of Yorik Mortwell giveaway:
1. Follow the Project Mayhem blog.
2. Leave a comment.
3. Take a midnight stroll around a graveyard (this rule is optional).
Congrats Stephen! Winner will be announced on Thursday of next week!
Posted by Hilary Wagner at 11/02/2011