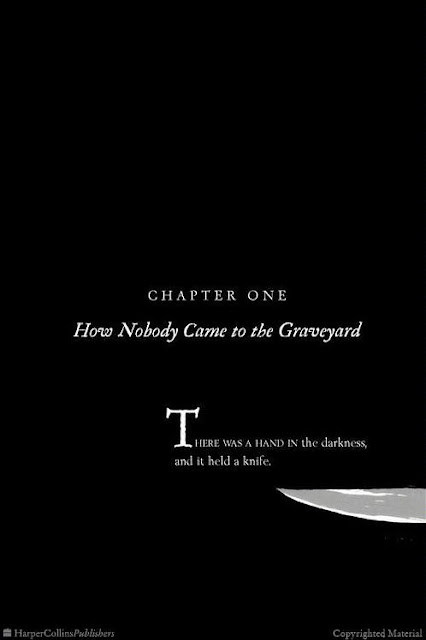 In case you can't quite read that, it says:
There was a hand in the darkness, and it held a knife.
Probably one of the better opening lines I've ever read, especially for a wacky, spooky, moving MG novel. I suppose you might expect nothing less from a master like Neil Gaiman, and I probably wouldn't blame you, but because of something I heard him say at WFC last fall, I wanted to focus on this book for a moment today.

Neil Gaiman and Connie Willis did a panel together, in which they basically just had a conversation about writing, and life, and books, and writing. The entire thing was absolutely fascinating, but one thing Neil said really stuck with me. He said (I'm paraphrasing here): "The Graveyward Book was the only book I ever wrote that actually ended up a better story on the pages than it had been in my head."

As writers, I think we all know what he means by that. At the time, I'd read this book a few years before, and I'd enjoyed it, but I hadn't been a serious writer at the time, so I decided to revisit it. The whole thing is truly a joy, but I want to focus on the first page (or the first 200 words or so, since there are illustrations).

There was a hand in the darkness, and it held a knife.

The knife had a handle of polished black bone, and a blade finer and sharper than any razor. If it sliced you, you might not even know you had been cut, not immediately.

The knife had done almost everything it was brought to that house to do, and both the blade and the handle were wet.

The street door was still open, just a little, where the knife and the man who held it had slipped in, and wisps of nighttime mist slithered and twined into the house through the open door.

The man Jack paused on the landing. With his left hand he pulled a large white handkerchief from the pocket of his black coat, and with it he wiped off the knife and his gloved right hand which had been holding it; then he put the handkerchief away. The hunt was almost over. He had left the woman in her bed, the man on the bedroom floor, the older child in her brightly colored bedroom, surrounded by toys and half-finished models. That only left the little one, a baby barely a toddler, to take care of. One more and his task would be done.

So, how bout that first line, eh? "There was a hand in the darkness, and it held a knife." Ominous, isn't it? It's an interesting first line too. It doesn't give us that much information, but it certainly sets the tone for this spooky novel.

And the second paragraph? Wow, that's quite a knife. This line tells us that perhaps something deeper is going on here. To me, it hints at the supernatural, which we soon discover is par for the course in this novel, but it also showcases Mister Gaiman's extreme talent for saying so much in so few words.

Then, in the third paragraph, things get dark, fast. And yet, this is a middle grade novel, so the darkness is subtle, and oh so clever. For adult readers, we can probably immediately infer that murder has been done, but for younger readers, it might not be so obvious until they come back to it.

From there, we meet the man Jack, a most interesting kind of killer, and things just get stranger and stranger ...

... has anyone read The Graveyard Book? What did you think of the opening? I don't know if it's quite A Tale of Two Cities, but I would still argue that this is one of the better first pages in modern literature. What do you all think?

I could go on for much longer analyzing this page, but I thought it would be more interesting to open a discussion.
Posted by Matthew MacNish at 5/18/2012