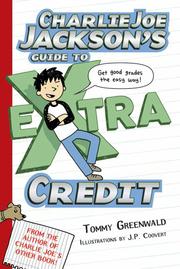 TO KILL A MOCKINGBIRD. OF MICE AND MEN. THE GREAT GATSBY. LORD OF THE FLIES. CHARLIE JOE JACKSON’S GUIDE TO EXTRA CREDIT.

Okay, that last one might not continue the “classic” tradition of American literature, but those first four do have something in common with the protagonist of the last one, Charlie Joe Jackson. And that is, Charlie Joe Jackson is sure to have never read those first four books, and if we learned anything from the first book in the series (CHARLIE JOE JACKSON’S GUIDE TO NOT READING) then we can be sure that Charlie will fight, tooth and nail, to make sure he never reads them in his lifetime. The problem is, if he doesn’t read them, he might be in danger of failing, and in turn, he might have to resort to anything to raise his grades, even (gasp), doing extra credit. Therein lies the crux of the second book in the series, CHARLIE JOE JACKSON’S GUIDE TO EXTRA CREDIT.

In this second book of the series, our lovable but ever-lazy Charlie Joe Jackson finds himself sweating bullets on Report Card Day (Charlie’s the only person who actually calls the day that, and that tells you quite a bit about his character right there). When his parents see that his grades basically add up to be an A short of AC/DC—a group I’m sure Charlie adores, since he’s a big classic rock fan—they (meaning, Dad, who serves as the “heavy” of the two parents) threaten to send him to Camp Rituhbukkee (Charlie jokes it stands for “Read-a-book”). So Charlie must attempt to make a deal with his parents to help him reclaim his summer freedom. That deal, Charlie decides, is that for the upcoming term he will get all A’s (and one B, because Science and Charlie are not A-greeable, if you get my meaning). Mom and Dad (see earlier note about the “heavy”) decide that it is a fair deal.

What follows is Charlie’s hilarious attempt at gaining extra credit in his classes, which means double the work and a whole lot of creativity on the teachers’ part to make Charlie work for it (translated: he pretty much must grovel like a pig for them). Sure to please the reluctant reader, and the reader who just acts reluctant because, you know, that’s the cool way to act, this second book is a great follow-up to the first one (which I loved) and is sure to lead to more Charlie Joe Jackson guides. I hope…you listening, Roaring Brook?

Voice aplenty, which is a strength of Greenwald’s, this book is uber-enjoyable to read. But by far, something I enjoy the most about Greenwald’s ability to craft a narrative in both this and the first book, is his way of “tricking” the reader. Behind a façade of a “Guide” he hides a full, elaborate narrative that allows for full development of some authentic characters. Using this sly slight-of-hand style, he is sure to hook and then reel in those aforementioned reluctant readers in the same manner a parent uses reverse psychology to trick the kids that veggies are not yucky, or hanging with the opposite sex is totally okay, or that wearing a sweater vest to church is the very definition of cool (okay, that last one is just evil, parents, please don’t make the kid wear the sweater vest…please).

Speaking of parenting, I kid you not, my son picked up this book many times to "read" to the point where it became a part of his hands. I think he was going for extra credit himself. Here's the proof: 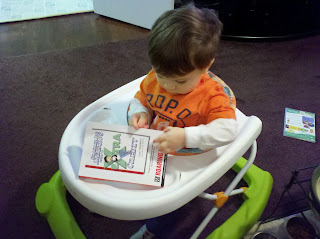 In sum, yeah, the book is great. Highly recommended. It releases TOMORROW (August 7) so do yourself a favor and pick up a copy. And if you wish, feel free to check out Project Mayhem’s old review of the first book, CHARLIE JOE JACKSON’S GUIDE TO NOT READING, or you can see my original interview with Tommy Greenwald to learn about the man behind the books guides.
Posted by Mike Winchell at 8/06/2012