With the beginning of a new school year in the mix, an occasion that many students and teachers find horrifying, I thought it’d be good to have Claire Legrand stop by to discuss horror in middle-grade books. It’s a tough thing to pull off in MG—horror—because you need to observe the line between scary and too scary, and Claire, whose debut THE CAVENDISH HOME FOR BOYS AND GIRLS, is here to offer her take. She is in the midst of a long blog tour, so check out the link at the end of the post to see where she'll be next. First, here’s a bit about Claire. 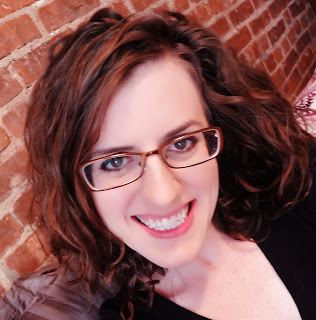 Claire Legrand is a Texan living in New York City. She used to be a musician until she realized she couldn’t stop thinking about the stories in her head. Now a full-time writer, Claire can often be found typing with purpose on her keyboard or spontaneously embarking upon adventures to lands unknown. The Cavendish Home for Boys and Girls is her first novel, due out August 28 from Simon & Schuster Books For Young Readers. Her second novel, The Year of Shadows, a ghost story for middle grade readers, comes out August 2013. Her third novel, Winterspell, a young adult re-telling of The Nutcracker, comes out Fall 2014. 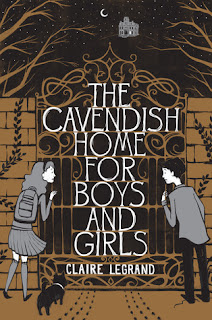 So, without further adieu, here is Claire to talk about horror in MG.

The Challenges (and Fun Parts!) of Writing MG Horror

At first, I didn’t like calling Cavendish a horror novel. “Horror” sounded so uncouth, so bloody and gory. It brought to mind cheesy slasher movies like Friday the 13th or—heaven help me—the Child’s Play movies (i.e., Those Movies That, Though I Have Not Seen Them, Traumatized Me For Life Simply By Being on a Shelf in Blockbuster Where I Could See Their Covers). When people say “horror,” it can elicit a revolted response from certain readers. Most people love comedies, or dramas, or action-adventure stories. But horror? To me, horror has always been a niche genre of storytelling that only a certain minority of people can stomach and enjoy.

Before selling Cavendish, I’d always called it a “dark fairy tale,” and I still like that classification. Cavendish is the kind of story you read to your children before bed, along with other tales about witches and kidnapped kids, dark fantastical creatures and towns that aren’t quite right.

But I’ve come to realize that, broadly speaking, Cavendish is horror. Pure, straight-up horror. Terrifying, unthinkable things happen, and not everything turns out okay for our heroes in the end. I’ve accepted this genre classification wholeheartedly. Why? Well, first of all, “horror” is a much easier label to explain than “dark fairy tale.” But there’s another reason, too.

Writing horror, quite simply, is fun. Especially writing horror for kids. Why wouldn’t I want to embrace this?

Uncovering the darkest parts within yourself and then writing about them, preferably in a safe apartment with lots of lights and cuddly blankets, is a great way to exorcise fears (although I am still terrified of bugs, even after writing Cavendish). Returning to the mindset of 9- to 12-year-old kid thirsty for scares, a kid ready to believe anything, read anything, be scared by anything, no matter how outrageous (Slappy the ventriloquist dummy from R. L. Stine’s Goosebumps books come to mind)? That’s fun, and liberating, like riding a roller coaster for the first time, or closing the bathroom door and saying “Bloody Mary” three times in the dark . . . and surviving. That’s the kind of pure thrill we seldom experience as adults, simply because we’ve experienced it so many times. The rush has diminished.

But as a kid in bed with a flashlight or sitting around a campfire with his friends, reading about things he’s never dared to imagine? Things that have always crept around the edges of his mind like vague shadows he was afraid to focus on for too long? That kid will remember those first horror books, those first deep scares, for the rest of his life. As an adult, he’ll see that book on the shelf, and shiver, and grin, and remember the exact way his heart pounded as he flipped frantically through those last, terrifying pages. I know I remember the first time I read The Dollhouse Murders. The Painted Devil. A Darker Magic. Night of the Living Dummy. They all scared me deep down to my bones. And now, even though I will probably forever fear dolls, dummies, or anything resembling dolls and dummies, I wouldn’t trade those literary experiences for anything.

For all the delicious glee that comes with crafting a child’s future psychological idiosyncrasies, writing horror for children can be extremely challenging, too. How scary is too scary? How dark is too dark? (My grandmother, who responds to all my writing with a kind but bewildered, “Where does all this dark stuff come from, Claire Bear?” would probably say that Cavendish is too scary and dark. But I disagree!)

When writing Cavendish, I only once stopped to think, “Is this too scary? Is this too much?” (And I think you’ll know which element I’m referring to once you read the book.) Aside from that, I wrote exactly the kind of scariness that had haunted me as a young reader, the kind of pure, raw scariness that you find in the darkest of fairy tales. Nothing so unsophisticated as people jumping out from dark corners or monsters with drooling black gums. No, the scariness that hooked me as a child, that still haunts me to this day, was the elemental horror. The horror that someone could take over your mind. Make others forget about you. Make you forget about yourself. Change you, forever, and in such a way that you wouldn’t notice, or even care.

That kind of horror poured out of me when writing Cavendish. I didn’t actually worry if it was too scary for kids because kids are smart. They can handle reading about dark, terrible things because they are so incredibly open, so accepting of the fact that there is evil in the world and so hopeful that it can be beaten.

What I did worry about at times—and this was after the book was written, once I began revisions—was whether parents would find it too scary. Teachers. Librarians. I think older readers scare more easily than their child counterparts. Maybe it’s that they’ve experienced real horror in the world, and seen how it so often can’t be beaten. Or it’s that they want to protect their children from even a fantastical, literary version of that horror for as long as possible.

Whatever the case, it was a real concern for me in the revisions stage, and it was a concern for some at my publishing house as well. Would the horror in Cavendish be too . . . well . . . horrifying to sell to the people buying these middle grade books, i.e., the gatekeepers?

The two things I focused on to get me through revisions, through these doubts and questions about whether or not I’d gone too far, were the following two mantras: Trust your readers. And trust your story.

The first mantra, trust your readers, I’ve already addressed. Kids are smart, savvy, and resilient, and they’ll be much more receptive to books and reading in general if neither coddles them or tries to hide them from darkness.

The second mantra, trust your story, is all about authorial accountability. If sitting down to write middle grade horror, consider the following: What story am I trying to tell? What tone am I trying to convey? What scary elements are necessary to communicate these things? And then, once those questions are answered, write exactly that. As with all the best horror stories, whether book or film, it’s not about how many scares you can fit into one story. It’s about what kind of scares, and how they’re fit into the story, and how they serve the story. Gratuitous violence, gotcha! moments, and gore may provide superficial shock value. But they don’t enhance a story’s core; and, even more importantly for authors of children’s literature, they could make booksellers, parents, and other gatekeepers balk.

Tell the story you need to tell, and use horror elements that are appropriate for that story. Just as, if I were writing a young adult novel, I wouldn’t insert gratuitous sex scenes or cursing just to be “edgy,” so would I refrain from inserting gratuitous horror elements in any story, but especially a middle grade story, just to get cheap scares.

After all, the best horror stories are those that make us work for the scares, those that take their time setting up a world and characters that feel real and relatable. That way, when the true horror begins, the story doesn’t need to rely on camera tricks or their literary equivalent to scare its readers. The story only needs to play out as it was meant to, a tale of normal people in a normal world that’s going slowly, irrevocably bad, and the heroine fighting to save it—even if her victory comes a little bit messily.

Make sure to check out the rest of the Cavendish Blog Tour here!

To win a hardcover copy of The Cavendish Home for Boys and Girls from Simon & Schuster Books For Young Readers, fill out the form below! Contest is U.S./Canada only. Contest ends September 22nd.
a Rafflecopter giveaway
Posted by Mike Winchell at 9/07/2012