The Upside of Ordinary by Susan Lubner 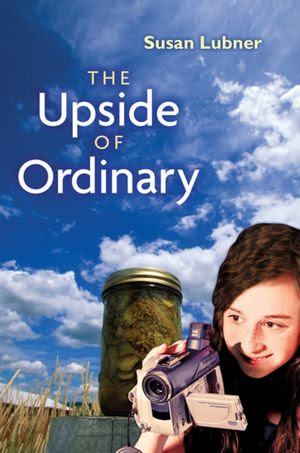 The Upside of Ordinary by Susan Lubner (Holiday House; October 1, 2012)
(Project Mayhem received an ARC from the author for review.)

Hi, Mayhemer Michael G. here. Thanks for joining me as I rave about this debut Middle Grade novel from writer Susan Lubner. (She's pubbed by Holiday House, who also publish Hilary and Dawn--so there's a lot of Mayhem love to go around.)

First, here's the story (from the Holiday House website):


Jermaine Davidson wants to be famous: limo-riding, camera-flashing, crowd-cheering famous. She decides to become the first eleven-year-old producer and star of a reality TV show about her life. Her family quickly tires of her following their every move, filming them night and day. But life around the Davidson house is dull, so Jermaine starts staging events to elicit more drama, excitement, and humor. Her unbridled ambition leads her to alienate her best friend over a disastrous make-over episode, send her arachnophobic mother packing, turn an emotional family crisis into a tacky mystery segment, and ruin her mother's chances to win the annual pickle palooza. Filled with remorse, Jermaine turns her talents to making amends and in the process learns the upside of being part of a loving but ordinary family.


My Five Favorite Things about the novel:


Now, I'm honored to be able to share the short interview I had with Susan Lubner, titled Fabulous Five questions:

1) You published several picture books before you wrote THE UPSIDE of ORDINARY. What made you try your hand at middle grade? Really it was just that I had this idea for the novel and it wasn’t something that was going to work for a picture book topic-wise. I was actually a bit nervous to attempt to write a whole novel, the process is so different, but I was excited by the new experience and challenge, and I enjoyed it!

2) Your main character's name is Jermaine--and she's 11. Where did you come up with that name? When I first started writing the story I was going to have the parents be big Jackson 5 fans. But I changed my mind about that as I went along …I wasn’t sure my readers would be that familiar with the group and it didn’t seem to be a necessary part of the storyline. But I love the name Jermaine (and okay, I love Jermaine Jackson too!) so I decided to keep that in the book.

3) Like Jermaine, are you a fan of reality TV? If so, what shows do you like? I do like reality TV. I like the “talent” shows (American Idol, Cupcake Wars, Iron Chef) and so do my daughters and we watch those together. I don’t want to throw myself under the bus by admitting to a few others I enjoy (ahem…housewives…). I generally record those shows and then “allow” myself to watch them when I am folding laundry or working out  on my treadmill.

4) Do you LOVE pickles and HATE spiders as much as Jermaine's mom does? YES and YES!!! I crunched my way through a lot of pickles while writing The Upside of Ordinary. and the habit seems to have stuck.  I used to reach for a stash of M&Ms when I worked and needed a break or had writer’s block. Now I go to the fridge for some pickles! As for spiders…just typing the word gives me the shivers.

5) We can't wait for another book from you. What is your next project? I finished a chapter book that I am about to revise (it may go from chapter book to middle grade novel…) and I am just polishing up a picture book manuscript that I will be sending off to my editor very soon.

Thanks so much, Susan!

BIG BONUS: For every comment, you have the chance to win a copy of THE UPSIDE OF ORDINARY after its release on October 1st. Bonus entries will be given for tweeting (#PMGiveaway) and/or mentions on Facebook. International Entries welcome. Winner will be announced on PM on Thursday September 27th.