The Best Part of Being a Fifth Grade Teacher ...

… is introducing kids to literature through read aloud.

Over the 24 years of my career as a teacher, I’ve seen education fads come and go. Holistic language vs discrete skills. Top down vs bottom up. Direct teaching vs student inquiry.  And through it all, I keep reading aloud to my students.  Even when it’s not in fashion.

There are some books I read every year. I think I’ve read NO MORE DEAD DOGS by Gordon Korman to two classes per year for the last six years, which makes at least 12 times I’ve read that book, not counting when I first discovered it. How can I stand to read a book so many times?  It’s the reaction of the kids.  It’s always the reaction of the kids that makes reading a book out loud worthwhile. 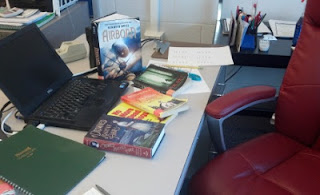 I practice (even after 12 times) getting the comedic timing down perfectly when Wallace Wallace, football star of NO MORE DEAD DOGS, changes the words of the school play so that the maudlin line: “We must look deep within our souls to accept this tragedy.” becomes: “Your dog died. Get used to it.”

I also practice certain lines from THE TEACHER’S FUNERAL by Richard Peck, hoping to say them without my voice quavering: “You could have knocked us over with feathers. Flopears had captured us all in his notebook. And we were so real, we almost strolled off the page. We'd gotten him wrong. He wasn't a dunce. He was an artist. According to these pages, he saw us all a good deal clearer than we'd ever seen him.”

Okay, I never can manage that bit without choking up, just as there are always tears for the ending of A LONG WAY FROM CHICAGO, also by Richard Peck, when Grandma lights up her house with lanterns so her grandson Joey, passing by on the WWI troop train, can see her waving from the doorway.

And it doesn’t go unnoticed, either. A parent once told me at conference time that her daughter came home and shared a story about Mrs. Salerni bursting into tears during read aloud. “Thank you for showing my daughter how literature can move you,” she said.

I’ll never forget the year I closed the final page of AIRBORN by Ken Oppel and a struggling reader in the class held out his hands for the book. He’d already asked me if he could take it home and read it all over again after I was finished. It was well above his reading level, but I handed it over with confidence.  Because I’d already read it aloud, I knew he would have reasonable success trying it on his own – and he’d grow a little bit as a reader while doing so.

His mother hugged me the next time she saw me.

This year, I had the opportunity to read one of my own manuscripts out loud. My two classes had a sneak preview of THE EIGHTH DAY, and reading my future book out loud was an incredible experience. Terrifying. But incredible.  I’ll have to share that in another post.

For now, I want to finish up by saying how excited I am to join the Project Mayhem team – as a teacher and a writer of MG literature -- and I’m looking forward to getting to know you all better.