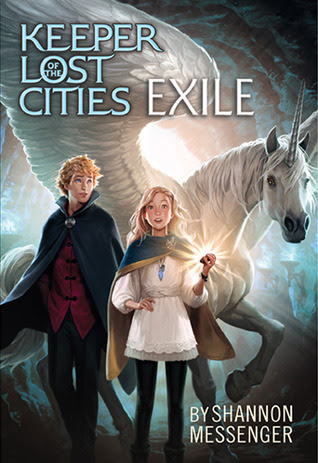 Before we get started, here is the blurb from Goodreads:

Sophie Foster thought she was safe. Settled into her home at Havenfield, surrounded by friends, and using her unique telepathic abilities to train Silveny--the first female alicorn ever seen in the Lost Cities--her life finally seems to be coming together.

But Sophie's kidnappers are still out there. And when Sophie discovers new messages and clues from the mysterious Black Swan group, she’s forced to take a terrifying risk—one that puts everyone in incredible danger.

As long buried secrets rise to the surface, it’s once again up to Sophie to uncover hidden memories—before someone close to her is lost forever.

In this second book in the Keeper of the Lost Cities series, Sophie must journey to the darkest corners of her luminous world in a sequel that will leave you breathless for more.

Furthermore, you can read Shannon's Project Middle Grade Mayhem blog tour stop for the release of book 1 in this series, or you can read my daughter's impression of the first book.

Anyway, Shannon was kind enough to include my daughter in the informal tour for the ARC of Exile (AKA Keeper 2). So today we get a look at the first page!

It opens with a Preface (not a prologue, because it's a kind of look-ahead), that reads like this:

Sophie's hands shook as she lifted the tiny green bottle.

One swallow held life and death--and not just for her.

Her eyes focused on the clear, sloshy liquid as she removed the crystal stopper and pressed the bottle to her lips. All she had to do was tip the poison down her throat.

Could she give up everything to set things right?

Could she live with the guilt, otherwise?

The choice was hers this time.

Pretty epic, right? Certainly just as tense as the opening to Keeper of the Lost Cities. What do you all think? Has anyone read Keeper 1? Are you looking forward to when Exile is released on October 1st this fall?
Posted by Matthew MacNish at 6/26/2013