Chris Eboch on What's in a Name? Finding a Title 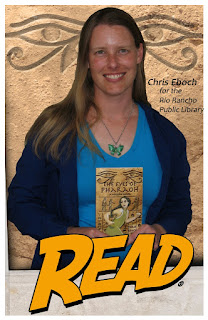 At the end of the school year, I visited a friend’s gifted class to talk to the kids about The Eyes of Pharaoh. One enthusiastic girl asked how I came up with my titles, because, “Titles are really hard.” Sometimes they are, sometimes they appear like magic, and sometimes Circumstances Beyond Your Control interfere.

The Well of Sacrifice, a middle grade adventure set in ninth-century Mayan Guatemala, had that title from the start. On a summer-long trip to Mexico and Central America after college, I had visited many Mayan sites – including Chichen Itza, which had a sacrificial cenote. Imagining a girl tumbling into that “well” inspired the novel. It’s a dramatic title and along with the cover art helps suggest a Mayan historical adventure. It’s nice when you find the right title at the beginning.

The Eyes of Pharaoh, on the other hand, was a struggle. The working title was “Spy Dancer,” because the main character is training to be a temple dancer but winds up acting like a spy after a friend disappears. I never planned to actually use that title, but the muse was not cooperating in finding a better one.

When I finished editing the book (in other words, the last possible moment to come up with a good title before submissions), I started brainstorming title ideas. I wrote down any word or phrase associated with the novel – setting, characters, plot threads, theme. I probably had 30 or 40 words/phrases, and then I began mixing and matching.

The head of the secret police in ancient Egypt was called “The Eyes of Pharaoh” or “The Eyes and Ears of Pharaoh.” This agent is a minor character in my book, but the character’s role doesn’t really matter – the concept fits with the ideas of spying and politics. The word Pharaoh helps identify the setting, and The Eyes of Pharaoh has a nice mysterious sound. Normally you wouldn’t title a book after a minor character, but in this case I think it works, which shows the advantage of jotting down everything in the brainstorming phase.

I like the title, but there is one problem – everyone, including those who’ve read it and loved it, calls it “Eyes of the Pharaoh.” Having people get your title wrong can’t be good. Fortunately, the first four hits from a Google search on that wording still turn up the book’s page on Amazon, my website, Goodreads, and Barnes & Noble, so I guess the damage can’t be too bad. 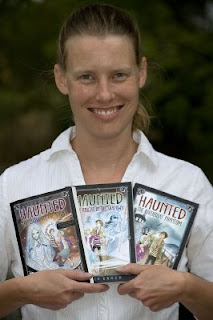 When I started my series about a brother and sister who travel with a ghost hunter TV show, I wanted to call it Ghost Hunters, but that was already taken by a reality TV show, so I used Ghost Trackers. A few months before the first book’s release, I got an urgent e-mail from my editor. A new Ghost Trackers TV show was coming out, featuring middle school kids, no less. We needed a new title.

I brainstormed all kinds of combinations of Ghost This and Haunted That. Finally, in the kind of epiphany that makes you wonder why you didn’t see it earlier, I realized it didn’t need to be Haunted-anything – Haunted alone worked.

Using a title that referred to the ghost who was featured in the book set up a pattern for the other books in the series – The Riverboat Phantom, The Knight in the Shadows (that one was my editor’s suggestion), and The Ghost Miner’s Treasure.

A title has to do a lot – intrigue, give a sense of the book, stand out from the crowd. The title may be the hardest words that a writer writes.

I asked a couple of Project Mayhemers and other writers for their title processes, and I’ll be sharing those tomorrow. Sophie Masson had a post on Finding a Good Title on Writer Unboxed, if you want more examples or advice.

How about you? Do you judge a book by its title? Do you struggle with your own titles?
Posted by Kris Bock at 7/17/2013