Writing the Opposite Gender: J.K. Rowling and THE CUCKOO'S CALLING 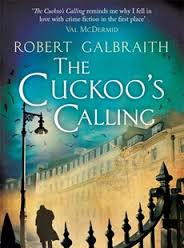 As I’ve posted here before, I’m a major fan of J.K. Rowling and Harry Potter, so when news came out that Ms. Rowling was the author of a new mystery for adults, I had to read it. I’m sure most of our readers have heard by now that The Cuckoo’s Calling, supposedly written by an ex-military man named Robert Galbraith, was actually written by J.K. Rowling. The story behind the unmasking is here:  http://n.pr/16DIWjv
One reason I wanted to read The Cuckoo’s Calling was to see if I could pick up any similarities with the Harry Potter books, books I’ve reread several times. I’ll admit upfront I absolutely could not tell. The only similarity I can find, trying hard to find one, is that I’m thoroughly enjoying the book, and the characters seem completely real to me, which is also my reaction to the world Rowling created at Hogwarts.
What surprised me most in the details of the unmasking was a comment that the reporters investigating the true authorship of the book thought it might have been written by a woman because of the accurate descriptions of women’s clothing. Granted, some men don’t notice details of clothing, but there are many who do. Good writers notice details, no matter what their gender. And in reading the book, I’m not finding Rowling’s descriptions jumping out at me as being overly detailed or female-like. The only section I found that seemed it might have been written by a woman, and only because I was looking for it, was the extremely realistic description of secretary Robin Ettacott’s day after her engagement. Could a man have written that? Absolutely, especially a man who has witnessed a friend’s or fiancée’s or sister’s reaction to such an event.
The whole idea of whether or not writers are capable of writing the opposite gender is debated among writers of adult fiction far more than middle grade. It’s so common now in middle grade, it’s hardly remarked upon, and that is largely thanks to J.K. Rowling, At the time the first Harry Potter book was published, we know she felt compelled to use initials because her books featured a boy main character. The success of the books taught most publishers that the gender of the author doesn’t matter, at least for middle grade.
I write from a boy’s POV, as do other Project Mayhemers, Eden Under Bowditch, Dianne Salerni, Marissa Burt, and Chris Eboch. Some of our members go even further outside a comfort zone of “write what you know” by writing from the perspective of nonhuman characters. Hilary Wagner writes from the POV of a rat, as does former member W.H. Beck. Of course, we don’t have rats weighing in on whether or not their portrayals are accurate, but if readers believe they are, that’s what is important.
I do believe to accurately write any character, there are some aspects to consider for believability.  In writing close third POV, I always think about what my character would notice when I’m writing descriptions. Most twelve-year-old will not notice the brand of women’s clothing a teacher is wearing. Nor will they notice great details about the landscape around them, unless it specifically impacts them. If a group of middle graders is walking down a street, ask them to describe what they’ve just passed. Most can’t tell you because they are intensely focused on the people around them, especially their friends. Getting that part right lends far more realism to a story than anything else.
I’m wondering if without the anonymous Twitter tip, Ms. Rowling could have stayed hidden longer had she chosen a woman’s name as a pen name. There is a long history of female mystery writers writing British male main characters. I love the novels by Agatha Christie, Ngaio Marsh, Dorothy Sayers, P.D. James, Elizabeth George and Martha Grimes. And in reading them, it never occurred to me to think about the gender of the writer.
For more details on the computer analysis run that suggested Rowling was the author, this is an interesting post: http://languagelog.ldc.upenn.edu/nll/?p=5315
~ Dee Garretson
Posted by Dee Garretson at 7/19/2013