A conversation with Terry Lynn Johnson 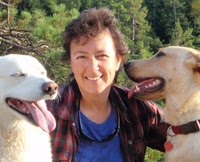 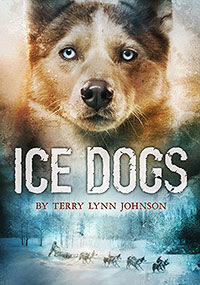 Victoria Secord, a fourteen-year-old Alaskan dogsled racer, loses her way on a routine outing with her dogs. With food gone and temperatures dropping, her survival and that of her dogs and the mysterious boy she meets in the woods is entirely up to her.

As you can see from the comments below it’s already a hit with reviewers and adventure writers:

"(A) thoroughly engaging and incredibly suspenseful survival story... Well crafted, moving and gripping."
—Kirkus
"A page-turner full of white-knuckle action...Readers will be riveted until the end."
—Publishers Weekly
"Ice Dogs is both a great sled dog story and a suspenseful tale of winter survival. The story's emotional depth is interwoven with the action. I found it authentic to the North, and read it in one gulp."
—Will Hobbs, author of Far North and Never Say Die

Paul: So, Terry, you’ve written this amazing adventure story, ICE DOGS, that is due out next month. The story centers around a dog team. Tell me a little bit about your experience with sled dogs.

Terry: I was owned by a dog team for many years. They took me all over the back trails of northern Ontario getting into some adventures and misadventures that were the inspiration to ICE DOGS. We raced for a while, but the dogs let me know they'd prefer to run a little slower. They loved it when we started working with kids teaching dogsledding classes at an outdoor school. When the dogs were pups we'd visit kindergarten classes for the experience of hearing high-pitched squeals of kids having fun. The dogs became accustomed to lots of attention and pretty much had my days set out for me. Morning - scoop poop, breakfast, and lots of individual attention. Then some trail running, followed by more attention, frozen chicken to chew on, and maybe some fresh straw in the houses. One little female, Elsie, loved fresh straw so much, she'd throw a party for twenty minutes in her doghouse - grunting, rolling, tossing straw into the air. That's the best thing about spending time around dogs - you can't help smile at their excitement and pure joy in the little things in life.

Paul: The extreme cold is definitely a factor in ICE DOGS. Tell me about a  "cold experience" you've had while mushing on the back trails of Ontario.

Terry: One frosty night (at least 20 below) camping sticks out in my memory - I slept in my winter sleeping bag on a tarp on top of the snow right next to my lead dog. The wolves had been howling around us, and the dogs were nervous on the drop line, so I stayed out with them. In the morning I was frozen to the tarp after my leader marked me as his by peeing on my bag.

Paul: Maybe the howling wolves had something to do with the peeing. Speaking of wolves or any other animals. Have you ever run into any animals on the trail that have caused a little ruckus with team?

Terry: One day the team saw a large black wolf trotting on the trail and started chasing it. But the wolf didn't seem too concerned. He stopped suddenly and looked back at us with an expression much like disdain, or boredom. His meaning was loud and clear to the dogs. They piled up on top of each other in an effort to stop. Then the wolf trotted off the trail into the trees. That experience inspired a scene in the novel.

Paul: Wow! I guess a situation like that can have many outcomes. One final question. Terry, I know you have lots of interest in all things out-of-doors. You're an expert kayaker and a long distance hiker as well as a dog musher. How did you get so interested in spending so much time in wild places?

Terry: I grew up on a lake and spent my share of time catching frogs and canoeing. But it was in my late teens, when I started working in a wilderness park where I learned how much I love being outdoors. It has influenced every part of my life. Now I work as a Conservation Officer, another outdoor job. I camp and play outdoors in my spare time. Being outside is my church - it fills up my soul. There is so much to be learned if we take a moment, step into the woods without iPods or cell phones or other distractions, and just be.

Next month (the day before ICE DOGS comes out) Terry will be back for a guest post. To learn more about Terry and her writing, visit her website. And, if you want to preorder ICE DOGS, you can do it here.