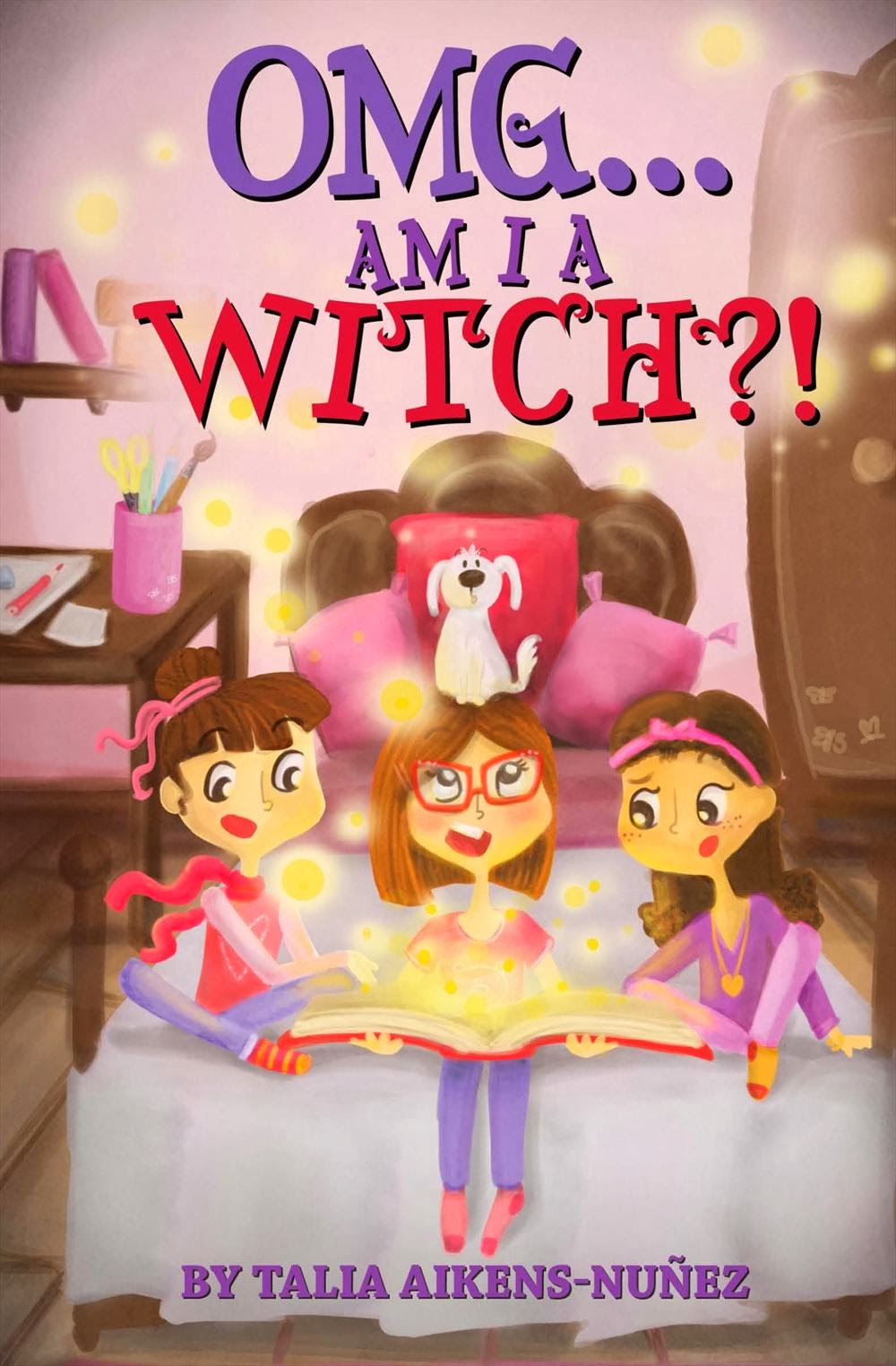 From the jacket: April Appleton is so annoyed at her older brother that she searches the Internet for a spell to turn him into a dog. When the spell works, April realizes she has more powers than she ever dreamed of! Now she has to figure out how to turn him back to normal before her parents find out. She has little time, but with help from her friends, Grace and Eve, she finds a book of magic that will hopefully reverse the spell. Will it work, and will April's new found magic save the day?

Talia Aikens-Nunez has written an endearing and delightful chapter book that mixes sibling rivalry with magical realism. The result? An enjoyable little romp that kicks off with a pretty serious problem (April has turned her brother into a dog), and continues to raise the stakes, until it reaches a satisfying conclusion. Along the way, Talia builds on moments of tension that will pull young readers through the book. The exhilaration of secrecy, under which April and her friends operate in order to return April's brother to his human state, is something that will keep readers following the action.

April and her friends, Grace and Eve, are cute, resourceful, and smart 5th-graders who young female readers will relate to. Talia successfully strikes the delicate balance of keeping the parents in the picture, while allowing the girls to solve the problem themselves. Mix in modern technology (Google, cell phones, texting), clean bathroom humor (smelly boys' bedrooms, dogs and their business, brothers who fart) and magical spell books, and you've got a tale that, while steeped in the fantastic, rings true.

This story takes sibling rivalry to a new level and demonstrates the genuine love and concern underlying that same rivalry. And it does so in a light, and entertaining manner. OMG...Am I A Witch?! is an easy to read, well-balanced, chapter book that will satisfy young readers, fuel their imaginations, and entertain.

Thanks to Pinwheel Books, I have FIVE books to give away to lucky Mayhem followers. But first...

I had the pleasure of asking Talia a few questions (13 to be exact) and she was kind enough to NOT turn me into a dog...Here's what she had to say:

ME:  So, you’ve created this endearing and magical story about a young girl (April) who turns her brother into a dog. Where’d this story idea come from and is there a back story involving growing up with an older brother? Sibling rivalry is a common denominator, how do you think or hope that your story relates or connects with your young readers?

TALIA: I do not have any brothers just 2 sisters. And, I am the oldest so I did most of the torturing…ha ha! No, I was a great big sister, I hope. But, this story came completely from my imagination. And, I hope this story encourages children to use their imagination and play, play and play some more.

ME: So, April Googles a spell. That’s funny. Do you anticipate your readers allowing magical belief and curiosity get the better of them? How many searches do you think your story might prompt, even just in fun? And speaking of magical realism, is this an area you typically write in?

TALIA: I hope there are TONS of google searches…in their imagination. I truly hope that this book, and hopefully, future books, that I wrote encourage children to play in the land of make believe. I really enjoy writing magical realism for middle grade readers. I feel like children that age are learning to like reading, they still allow themselves to be kids and can get lost in magically realistic books.

ME: April is just getting into her potential by the end of the book. Will we get to see more of what she can do? And what about Eve and her family? Seems like you might have a potential series idea here in chapter books. Any plans there?

TALIA: I hope so! I would LOVE to make a series out of April’s ‘gift’ and a little fun with her friends. And, I would love to delve deeper into why April has this ‘gift’, how Eve’s grandmother plays into this and if Eve also has a ‘gift’ or two.

ME: Can you talk to me about your writing process? How do you approach your story? Are you a planner or do you allow the story to unfold as you write? What is your writing method?

TALIA: I start by allowing the story to come out. Sometimes that is in the form of a story board and other times it just comes flying out as I type for hours. But, of course, each story then has to be edited and re-edited about fifty times.

ME: Where do you write? Can you describe your writing space?

TALIA: I like to write in a comfy chair in my house with the laptop on my lap. Sometimes I will transition to the bedroom or in front of the fireplace but I have to be in a comfortable chair or space.

ME: When and how did you know you wanted to be a writer? There’s usually some moment in a writer’s life that tells them that this is what they want to do. What was that for you?

TALIA: Ah! Yes I do. It was after my first child was born in 2008. She is multicultural so I wanted to buy books for her that reflected her background and exposed her to other cultures. I wanted books that spoke specifically to culture and others that just had multicultural characters but universal topics. I found it to be difficult to find the latter. So, I started to write them!

ME: Can you talk about your process in getting this story into the hands of Pinwheel Books? What was that like and what did your road to publication entail?

TALIA: Honestly, I just sent them a query. They liked the premise and asked for the manuscript. There was a lot of editing but they were able to see the potential in the story. They have been awesome to work with!

ME: What are you reading now? What are some of your favorite childhood books?

TALIA: Madeleine L’Engle’s A Wrinkle in Time is my ALL TIME favorite book. And, I just picked up another Magic Treehouse book to read today. It’s a snow day here J

ME: What advice would you give young writers?

ME: What advice would you give children’s writers, especially those tackling chapter books or early middle grade?

TALIA: Keep writing and keep querying. Query agents, query publishers, query other publications. Sometimes it takes a while but it will eventually work out!

ME: I see that you have another book finished? Dragon Guardians. What is that about and where is that in the process?

TALIA: I am querying publishers and agents about Dragon Guardians. That is also a magical book but with boys as the main characters. But, in that book, the older brother is trying to save his sister who was kidnapped by dragons. It is TONS of fun!

ME:  What are your goals as a writer? Long and short term.

TALIA: In my dream world, I would love, in the short term, to win an award or two for OMG…Am I a Witch?! And to be recognized as an up and coming children’s author. In the long term, I would love to have two series of multicultural children’s chapter books: one geared to girls and one to boys.

ME: What’s your favorite animal and why?

TALIA: Right now, my favorite animal is a giraffe. No two giraffes have the same size and pattern of spots. Each one is different and unique. Their spots are like our finger prints. But, they do have one similarity. As they age their spots become darker. So, even though they are all different they are in some ways the same, like humans of different races.

You can find Talia through her website at http://talia-aikens-nunez.vpweb.com/

***Now, as promised, I have FIVE books to give away!!! Win a book for yourself, your class, or a young reader who you know would appreciate a good book. How? Here's how:

In the comments below, tell me what kind of power you wish YOU had when you were in fifth grade, and why. I'll send the five most creative, interesting and/or entertaining answers a copy of OMG...Am I A Witch?!