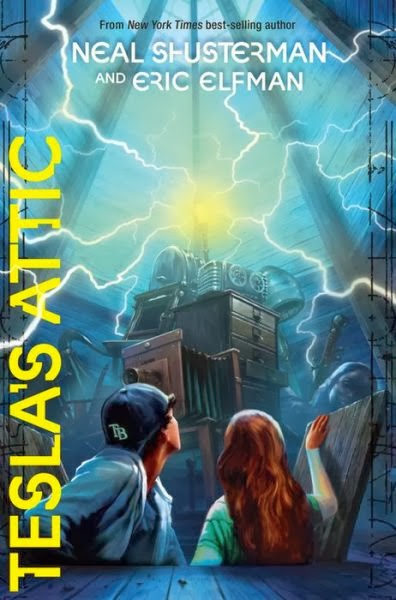 Project Mayhem is very happy to welcome authors Eric Elfman and Neal Shusterman, who kindly took time out of their busy promotional tour to answer a few questions for us about their new middle-grade release, TESLA'S ATTIC. In TESLA'S ATTIC, protagonist Nick discovers the junk in the attic of the old Victorian house his family has moved into has some very odd properties (like the toaster that hits him in the head). He and his new friends soon learn these items are the last inventions of the famed Nikola Tesla. Now they have to keep them out of the hands of a mysterious secret society in this exciting start to a new trilogy.

You can read more about Neal and Eric at their websites (links at the end of this post). But without further ado, here's our interview:


Please tell us about your exciting new middle-grade release, TESLA'S ATTIC. What inspired you to write this book?

NEAL: Have you ever been to a garage sale where they have all this weird stuff and you don't know what any of it is? That happened to me a while back. A guy was selling all this electronic equipment, and I asked him what one thing did, and he said, "I don't know. But I'll sell it to you for five bucks."

ERIC: When Neal told me about that, we were developing projects for TV and film. We started to work on the idea, and it eventually became the novel, TESLA'S ATTIC. Our story begins when fourteen year old Nick moves into a house his family inherited, and he finds a bunch of antiques and rusty appliances in the attic. Nick wants to use the attic as his bedroom, so he sells all the rusted junk at a garage sale.

NEAL: Only after it's all gone, our kid discovers that they were the last inventions of Nikola Tesla, the greatest inventor of all time. Now, with the help of his friends, he has to get them all back. Except he didn't count on a secret society of physicists called the Accelerati, trying to beat him to the inventions.

The two of you co-wrote TESLA'S ATTIC. Is it challenging writing with another author? Did you ever butt heads (politely and respectfully, of course) regarding the direction you wanted the story to move in or any other aspect of the book?

ERIC: We love working together -- mainly because we have similar senses of humor and  sensibilities about story, so it's great fun for us to work as partners. Also, writing is usually such a solitary activity, so bouncing ideas off another person is a treat -- especially when that person is Neal.

NEAL: And we make it a point to never disagree about the direction of the story -- we both have to agree, or it doesn't go in the book. If one of us doesn't like something the other came up with, we have to come up with something we can both agree on. But that's easy, because we trust each other's instincts.

ERIC: On a technical level, we've started working in GoogleDocs, because it allows us to both be in the same document at the same time, even if we're hundreds of miles apart. We'll sometimes even be in a coffee house working together, with both our laptops open to GoogleDocs, so it looks like we're playing a game of Battleship.

Both of you have written for older audiences before. What do you think is unique about writing for middle grade? Do you have any tips for those interested in writing for a middle-grade audience?

NEAL: It’s like writing for adults who can’t drive. The writing still has to be the same quality, the story as strong and compelling, the characters and relationships as solid, the climax as powerful. The trick is telling the story from a middle grader's pov. You have to ask yourself 'how would a fourteen year old react to this obstacle?"

What is the best piece of writing advice anyone has ever given you?

ERIC: For me, I'll never forget an interview with a well-known author I heard on the radio when I was a teenager. He said, "I guarantee, if you keep writing, you will get published." And I took that to heart, and just kept at it. A lot of my friends, good writers, stopped writing and took other jobs, but I persisted. And that writer was right, I did get published.

NEAL: Write out of your comfort zone.  Different styles, different genres. It’s the only way to grow as a writer.

What are the links to your websites, and where is best place for readers of this blog to go to find out more about TESLA'S ATTIC?

ERIC: My website is www.ElfmanWorld.com; for writers seeking advice, my coaching site is www.ericElfmanCoaching.com; and my Facebook fan page is www.facebook.com/EricElfmanAuthor.

Thanks again for stopping by Project Mayhem, Neal and Eric! We hope everyone will rush out and grab a copy of TESLA'S ATTIC. (I know I will.)
Posted by Dawn Lairamore at 2/21/2014