UPDATE: THE WINNER OF THE GIVEAWAY IS TARA! Thanks everyone for commenting and I really encourage you all to check out Karen's marvelous MG books! 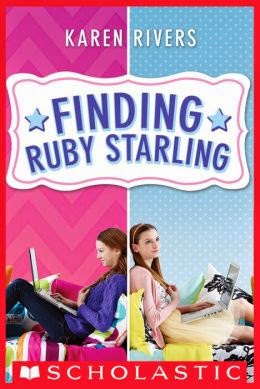 I recently requested a book off NetGalley based mainly on the cover and the premise of “The Parent Trap meets the digital age”, but I hadn’t heard of the book or author and had no idea what to expect. FINDING RUBY STARLING by Karen Rivers delighted me so much I ended up tracking down the fantastic author to answer a few of my questions, and one very lucky blog commenter will win a signed copy of FINDING RUBY STARLING and a copy of its companion novel THE ENCYCLOPEDIA OF ME.

When Ruth Quayle used a special app to search for pictures of herself online, she found dozens of images of "Ruth Quayle" -- and one of "Ruby Starling." When Ruby Starling gets a message from a Ruth Quayle proclaiming them to be long-lost twin sisters, she doesn't know what to do with it -- until another message arrives the day after, and another one. It could be a crazy stalker ... but she and this Ruth do share a birthday, and a very distinctive ear....

Ruth is an extroverted American girl. Ruby is a shy English one. As they investigate the truth of their birth and the circumstances of their separation, they also share lives full of friends, family, and possible romances -- and they realize they each may be the sister the other never knew she needed.

Written entirely in e-mails, letters, Tumblr entries, and movie scripts, FINDING RUBY STARLING is the funny and poignant companion to Karen Rivers's THE ENCYCLOPEDIA OF ME. 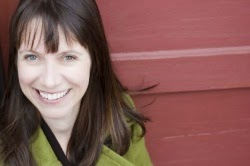 Karen was awesome enough to answer a few of my questions.

I did not have Ruth's story in mind, but I've long been a fan of "series" books that aren't series. Taking a look into some of the background characters is just a whole lot of fun. I found Ruth fascinating and my editor and I had talked about her quite a bit. She was quite fully realized, even though she wasn't in the book much. I just really wanted to go further with her.  (And also with Freddie Blue Anderson, who will hopefully be the next girl from Cortez to get her own book.)

FINDING RUBY STARLING is written almost entirely in emails (with the occasional claymation video script and Tumblr poem thrown in). I was concerned as the story went on that we might not get the full weight of the climax, as filtered through emails. As it turned out, I shouldn't have worried (if my sobbing was any indication). How did you decide whose perspective certain scenes should come through? Was it a struggle to hit the right emotional tones in pivotal scenes, given the structural limitations you'd given yourself?

I honestly didn't think of it that way, about who should have the perspective. It just happened naturally. I wrote the book in the order that you are reading it in, when it felt like Ruth's/Ruby's "turn", then I just pivoted and went with it. Some of the scenes were harder than others. The ones that come to mind are the letters from Ruby's mum and from her Nan. Those ones had a LOT of editing. It was hard to go there without going either too far, or not far enough. My instinct was to pull back, but luckily my editor, Cheryl Klein, is smarter than me and convinced me to just put it all out there.

You write super convincingly as both British and American -- and you are Canadian, right? Have you spent time in the UK, or do you have British relatives? (Amazeog is my new favorite word, by the way.) How did you decide to make Ruby British?

I am Canadian, which makes me a bit half and half. We have a lot of American influences obviously, and I live in a part of Canada that is frequently described (cringingly) as a Little Bit of Olde England. I have many British relatives and a smaller subset of Canadian relatives with a strong penchant for all things British. And I grew up reading British boarding school books and still love reading British books. Originally I started writing this book with a British friend, Kate LeVann. She was going to be the British voice and I was going to be the American, but that hit the skids relatively early in the process and I decided to just run with it, knowing that clever editors would pick up all my glaringly non-British mistakes. I think both characters are suitably over the top with their nationalities such that they come off as being so incredibly different, it's part of what makes the book fun. I have never had so much fun writing two characters, that's for sure.

You write adult fiction, YA, and MG! Any more MG projects in the works right now?

I am writing Freddie Blue Anderson's story, which will be middle grade and will (hopefully) delve into the subject of mental illness in children, as well as touch on things like how society instills a terrible vanity into pre-teens and how sometimes that can be very difficult for them to manage.  And bullying. And toxic friendships that can sometimes be very difficult to dodge. Also, there are auditions and acting; friendship and loss. It doesn't sound that cheery when I describe it like that, but much like ENCYCLOPEDIA OF ME and FINDING RUBY STARLING, I think it has a lot of moments of humour all huddled around a much bigger, more serious issue. I also just sold two YA novels to Farrar Strauss Giroux and I'm really excited to see what happens with them. One is called GREAT WHITE ME, and the other is titled HOW TO SAY YOU'RE SORRY TO THE DEAD.   My pet project right now is an adult literary mystery, although that is not really the right descriptor either as it's not so much a mystery as it is an examination of life in the 21st century, wherein it's not as uncommon as it certainly should be for someone to, say, shoot up a school full of children.   It's a look at tragedy in the Pinterest world, let's say. I don't really know for certain where it's going, but there are beaches and long grasses and fireflies (or the search for them). I feel like when I'm asked to describe it, all I see are the sand dunes and crashing waves, so there you have it. I'm loving the experience of writing it, so far. Fundamentally, I don't find there is much difference in writing for teens or tweens or adults, it comes down to the age of the protagonist and then, obviously, the way they see the world through their experience. I feel very lucky to be doing any of it, I couldn't have made up a better job for myself. 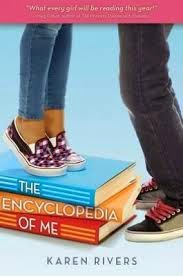 Thank you so much, Karen! I can’t wait to read THE ENCYLOPEDIA OF ME and am thrilled there is another companion novel coming!

Project Mayhem readers, one lovely commenter will be chosen to receive a copy of THE ENCYLOPEDIA OF ME and a signed copy of FINDING RUBY STARLING. (Be sure to give us a way to contact you in your comment.) These are really fantastic gems to add to any MG collection! I hope you love them as much as I did!

Did you ever imagine a long-lost twin when you were growing up?
Posted by Joy McCullough-Carranza at 8/08/2014