REVISIONS! And Other Big Projects by Anne Nesbet

This is a picture of the letter I just got from my amazingly perceptive Candlewick editor, Kaylan Adair, about things I might want to fix in Cloud & Wallfish, a historical spy-vs-spy novel for kids that's set in East Berlin in 1989. Notice something? THIS LETTER IS SEVENTEEN PAGES LONG!! And single-spaced, by the way! That's a lot of letter. 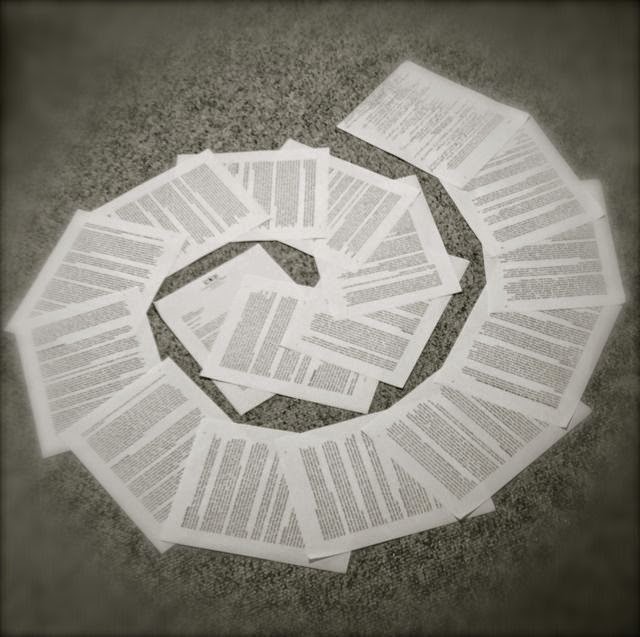 I spread it out artistically on the floor and took this picture, because a letter like this is a challenge and a treasure, both at once, and I wanted to document that somehow. Think how much effort and patience and perceptiveness and love go into an umpteen-page editorial letter! No book could be luckier. At the same time, think how much effort and patience and love are going to be required from the writer (aka "me") as she works through the points brought up in this letter and gets those revisions done by May first. Nope, no book could be more about to be torn to pieces and reassembled.

But as I begin this month of hard work, I thought I'd talk a little bit about how I tackle formidable tasks, like revisions--and ask you how you do the same.

STEP ONE (historically). Read It and Weep. The nice folks on Twitter almost always prescribe an immediate dose of wine and chocolate when an editorial letter arrives. I have to say that these days I don't even bother to weep. I'm just plain too much in awe of the work the editor has put into finding the weak spots in my manuscript to want to weep. The book is going to end up being so much better than it is now! That's amazing! So my current STEP ONE is simply Read It and Move On to Step Two.

STEP TWO. Let It Rest. In the past STEP TWO involved more flailing about, of the "What? What? But I thought that bit was good!" variety. Now I know to let it rest. For a few days, I leave the letter itself alone. That doesn't mean I'm not beginning to work, though. The first reading (STEP ONE) is enough to give me a feeling for what I'm going to be facing, so I start immersing myself back into the research (or the world-building). Often I've been waiting a while for the editor's letter, which means that often I've has been working hard on other projects. STEP TWO's rest phase lets me sink back into the world of this story.

STEP THREE. Turn the Letter into a List. This is the real reading of the letter. My resistance (thanks to STEP TWO) has been side-stepped, overcome, or outsmarted. I print out the letter and read it bravely and carefully, and as I go, I turn each of the editor's comments, questions, or suggestions into an item on a massive revision checklist. This particular 17-page letter is now a 5-page checklist. I'm not yet officially finding solutions to the problems--hey, I'm just making a list. And yet, miraculously, some solutions are beginning to elbow their way into the world. I note the ideas as they pop up.

STEP FOUR. Tackle One Chunk of the List at a Time. Fortunately, I love brainstorming. I take one plot problem, and I wrestle it to the ground, using pen and paper and strong tea and occasional conversations with friends, because explaining something to another person can really help ideas come together, even when that other (patient) person is just saying, "unh hunh, unh hunh, yeah!" The main thing during STEP FOUR is not to freak out about other parts of the list when you're chipping away at one particular item. STEP FOUR has to be repeated over and over and over for days and weeks. This is April, fourth month of the year: STEP FOUR month! By the end of STEP FOUR, I have a new version of the long checklist--now it's a list of solutions and fixes and reasons why so-and-so does such-and-such.

And that brings us to STEP FIVE. Quick, Transfer Those Fixes Into the Book. Finally I get to start checking things off my list, item by item, as I fold the fixes into the story. I like to have everything completely worked out in my head and in checklist form before I start messing with the text. Do unforeseen problems arise as my utopian solutions meet the actually existing prose? Oh, yes, they do. But if I've done my STEP FOUR work well, STEP FIVE isn't really that terrible.

STEP SIX. Make It Lovely. There should, ideally, be another pause between STEP FIVE and STEP SIX, but by this point in the process, time is almost always short. Still let me suggest that it is wise to try to get a good night's sleep before beginning to polish all that prose.

STEP SEVEN. NO, NO, NO! BACK AWAY FROM THAT SEND BUTTON. Have Someone Read the New Version First. Because by now, frankly, you are probably pretty groggy. Get somebody less groggy than thou to take a look. When that somebody says, "Looks great!"--then yay! You can move on to . . . .

STEP EIGHT. Off It Goes! Ah, but don't get too emotional. It'll be back, and probably with another long  letter, too.  And then it will come back again. And again.
In fact, just today I sent what I THINK was the last, last, last, last set of corrections along to HarperCollins for THE WRINKLED CROWN, coming out this November.


So that's my process. I'm curious, though: what is yours? How do you tackle enormous tasks and overwhelming projects? Any tips for making progress while remaining sanguine and sane?
Posted by Anne Nesbet at 4/02/2015