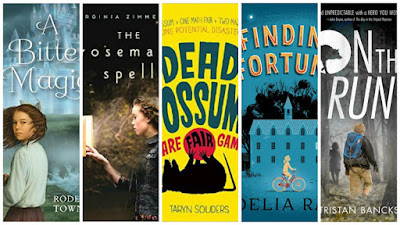 The world would be a better place without math or messy roommates. At least, that’s what Ella Hunter believes. Life is about keeping order and avoiding long division, fractions, or really anything with an equal sign.

As the end of the school year approaches, the fifth-grade teachers at Victor Waldo Elementary conclude there’s not enough time to complete a new math unit before summer break. Great news for math-phobic Ella, right?

Wrong! The teachers decide instead to have their students host the first-ever Math Fair. And the fair project is worth two major math grades.

Add in one dead possum plus two horrible roommates who come to stay while their house is being renovated, and you have an equation for disaster. Ella is headed for summer school and math tutoring for sure. Can she stop her troubles from multiplying before it’s too late?

Everything is in place: the packed theater, the Amazing Thummel, and, center stage, the magician's mysterious assistant. Some have called her the most beautiful woman in Europe.

Then, in a swirl of light, she vanishes!

An astounding illusion, but she never reappears. All that remains are a bloodstained white scarf and her daughter, Cisley, who lives in a glass castle and walks her pet lobster each morning by the sea.

Enter Cole, a rambunctious boy from town and Cisley's first true friend. Together they hunt for clues to her mother's disappearance. They puzzle over broken mirrors, ever-shifting labyrinths, a closet full of whispering ball gowns, and a fatal quest for a pure black rose.

Roderic Townley spins a deliciously spooky tale of one girl's journey to discover what's real and what is simply an illusion.

Running away from home isn't as easy as Ren thinks it will be. At least she isn't running very far -- just a few miles to the ghost town of Fortune . . . or Mis-Fortune as everyone else calls it. Mis-Fortune on the Mississippi. Supposedly, there's an abandoned school on the outskirts with cheap rooms for rent. Ren knows her plan sounds crazy. But with only a few more weeks until Dad comes home from his tour of duty in Afghanistan, she also knows she has to do something drastic so Mom will come to her senses and stop seeing that creep Rick Littleton for good.

From the moment she enters the school's shadowy halls, Ren finds herself drawn into its secrets. Every night old Mrs. Baxter, the landlady, wanders the building on a mysterious quest. What could she be up to? And can Mrs. Baxter's outlandish plan to transform the gym into a pearl-button museum ever succeed? With a quirky new friend named Hugh at her side, Ren sets out to solve the mystery that could save Fortune from fading away. But what about her family's future? Can that be saved too?

On the Run by Tristan Bancks (November 17)

One afternoon, four police officers visit Ben Silver’s home. Minutes after they leave, his parents arrive. Ben and his little sister Olive are bundled into the car and told they’re going on a holiday. Which is weird, because Ben’s family never goes on holidays.

Things aren’t right and Ben knows it. His parents are on the run. So Ben and Olive are running, too.

Ben’s always dreamt of becoming a detective – his dad even calls him ‘Cop’ because he asks so many questions. Now Ben gathers evidence, jots notes and tries to uncover what his parents have done. The trouble is, if he figures it out, what does he do next? Tell someone? Or keep the secret and live life on the run?

Part mystery, part literary puzzle, part life-and-death quest, and chillingly magical, this novel has plenty of suspense for adventure fans and is a treat for readers who love books, words, and clues.

Best friends Rosie and Adam find an old book with blank pages that fill with handwriting before their eyes. Something about this magical book has the power to make people vanish, even from memory. The power lies in a poem—a spell. When Adam's older sister, Shelby, disappears, they struggle to retain their memories of her as they race against time to bring her back from the void, risking their own lives in the process.