Dr. Fell and the Playground of DOOM 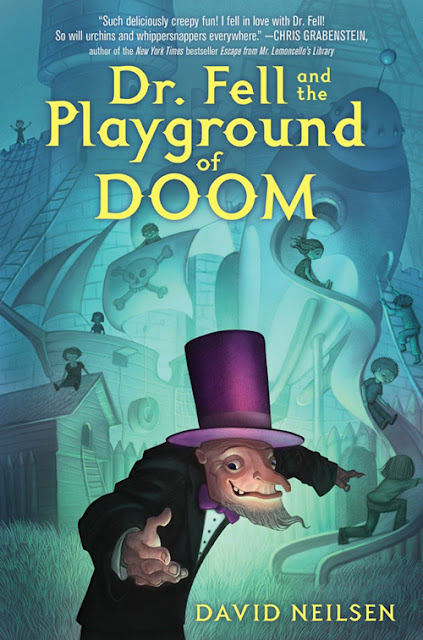 And Now for the Review

Dr. Fell and the Playground of DOOM is creepy, funny, and perfect middle-grade horror for those kids with a taste for the dark side (Hmmm, tastes like chicken).

Dr. Fell arrives in the quiet neighborhood of Hardscrabble Street, takes over a long abandoned home, and turns the front yard into the titular playground overnight. The local children are seduced by the endless adventures offered by the playground as it takes the shape of whatever they imagine it to be – rockets, castles, pirate ships, climbing walls, mad tea parties, catacombs, etc. The kids love it, even when the injuries start piling up – sometimes grave trauma. But injuries are no problem for the doctor, who swoops in and performs miraculous feats of medicine behind the closed doors of the formerly abandoned house. In no time, Dr. Fell mesmerizes the entire town (including the parents!), and it's up to the heroic efforts of the three main characters to somehow save the day from Dr. Fell and his ancient horrors.

Author Neilsen's background in storytelling and theater shows in the language which lends itself to quality read-a-loud activities for families, libraries, and schools. This book will find a home among shelves cluttered with R.L. Stine, David Lubar, Adam Gidwitz, and Neil Gaiman.

Just be sure to have a night light handy.


The Interview Portion of Our Entertainment


How did this story come to you? It's your first book for kids. Did it start out that way, or did you realize that when you were into it?

The idea for the book came from an illustration by the late children’s illustrator Trina Schart Hyman. It had been hanging on the wall of my in-laws’ for years before I ever really looked at it.  It shows a man in a suit and top hat leering down at a little girl, who looks back at him suspiciously. The man has a large basket strapped to his back out of which are sticking various arms, legs, and heads of little children. It’s labeled “Dr. Fell” and Hyman drew it when asked to create an image from her favorite fable or fairy tale. Curious, I looked up Dr. Fell online and discovered the four-line poem written in 1680 which I’ve included at the beginning of my book.

I loved the picture, and right away all sorts of questions jumped into my head. Who is this guy? What is he doing? What happens when he comes to town? The story began to take form when I went about answering these questions.

From the start, I knew this was a book for kids. It’s actually my second book. My first book, which has yet to be published, caught the attention of an agent who took me on as a Middle Grade/YA author, so I’d already started down the path of writing Middle-Grade fiction when I began to put this story together.

How does your storytelling experience inform your writing? Do you read your work aloud as you draft?

My storytelling and my writing are two sides of the same coin. I have brought stories I’ve written into my work as a storyteller, and have taken stories I crafted as performance pieces and sold them as short stories. I have a theater background, so I do tend to read my work aloud when I’m going over it, to make sure it reads well and isn’t too clunky. I have always read aloud to my kids at night, and I like to think that parents will read my book aloud to their kids. I keep that in mind as I write, and make sure that everything flows the way I want it to. I teach a writing workshop for kids through Writopia Labs and always advise my students to read their work aloud, even if alone in their room, because you may realize that what looks good on the page may not actually sound good out loud.

What horror authors for kids have influenced you?

Obviously, when you think of children’s horror, you think of R.L. Stine, and while I’ve read several Goosebumps books. I’m more partial to horror of the mind, rather than jump scares and gore. Neil Gaiman’s The Graveyard Book and Coraline are two fantastically creepy tales. I also liked Jonathan Auxier’s The Night Gardener. Recently, I devoured Claire Legrand’s amazing novel, The Cavendish Home for Boys and Girls. I loved the truly disturbing descriptions of the home itself, as well as the darkness into which the plot descends. A great book.

What were the challenges of bringing a Lovecraftian themed story to life in a middle-grade book?

I think Lovecraftian themes are perfect for Middle Grade. Behind the tentacles and the madness inherent within Lovecraft’s work is the overarching theme of Forbidden Knowledge--the truth is worse than you could imagine and there is a terrible price to be paid for learning what you should not have learned. Children at this age are spreading their wings, as it were and their worlds are becoming larger by the second. Our job as parents is to guide that learning in the right directions. With Dr. Fell, there is obviously a terrible secret to uncover, but at what cost? The children are definitely changed by their experience and encounter with Dr. Fell, but changed for the better?

And then, of course, I did have to have some sort of tentacles in there as well. Because I love tentacles.

Is there a sequel?

While there’s nothing officially in development, I think a lot about a sequel. It took me a long time to figure out how to best craft a sequel without breaking the rules I set up in this book. I wasn’t entirely sure one existed. But things fell into place, and I figured out what I wanted to do, and so I’ve started putting notes in order and writing a few chapters. My next book is a stand-alone novel coming next August tentatively titled Beyond the Doors. And I’ve written another book after that also not related to Dr. Fell. But I do hope to return to the bad doctor sooner rather than later. I’m excited to the tell the next chapter of his story.

Isn’t he already running? I once saw a banner online which read something along the lines of “I’m voting for Cthulhu so that he’ll devour my soul last.” If Cthulhu wins humanity loses, but if you support him, you’ll get a few more days to live. Eating humanity takes time.

David and Dr. Fell are the making the rounds of several other blogs. Here's the list for those that to learn more about the book, the author, and the Evil Dr. Fell. Mwa-ha-ha-ha-ha-ha!