Last year I was stuck on my MG about a girl, the star of an all-boys soccer team. During a writing exercise in which I was brainstorming what could have happened that she gets kicked out of her team, I made a list of things that happen at the age of twelve. The first thing on my list was: she gets her period. As soon as that thought formed, all the loose pieces of my story fell into place. Yes! She gets her period, and gets kicked out of her team, but since she's not the quitting kind, she joins another team, a girl's team.

[Sidenote on girls' quitting sports during puberty: Data from the most recent Always Confidence & Puberty Survey*, shows that by the end of puberty, half of girls surveyed (51 percent) will have quit sports. Olympian gold medalist and World Champion Alex Morgan has said, "At age thirteen one of my coaches told me that I wasn’t good enough. As a young girl just wanting to play and do my best, that was difficult to hear. It would have been easy for me to quit - but I wouldn’t be the confident person I am today if I had.” Here's a clip from the #LikeAGirl campaign that inspires me to do my best job as an author to empower kids, especially girls:

Talking about this link between depression and puberty, Karen Houppert, author of The Curse: Confronting the Last Unmentionable Taboo: Menstruation, says, “The likelihood of severe depression doubles for girls in the year after the onset of menstruation… While the physical changes girls go through in puberty happen slowly, when they get their periods, they suddenly have a different body image."]

Eager to get my representation of this experience right, I turned to my trusted companions: books. To my utter disappointment I discovered that in middle grade we can write about pretty much anything, but puberty seems to be the last remaining taboo. Of course there's THE period book, Judy Blume's Are You There God? It's Me, Margaret. Blume's novel has also been one of the most challenged books of all US literature. Judy Blume talks about Margaret, an early bloomer. Rita Williams-Garcia in No Laughter Here tackles not only the issue of puberty in a ten-year old girl, but also the reality of the Female Genital Mutilation that still cripples thousands of girls around the world, including the US.  In the author’s note, Rita Williams-Garcia writes that “every year, approximately two million girls undergo FGM... Although FGM is performed on young girls, materials written for young readers about this topic are scarce."
What’s even worse, the books that are available are few and, like No Laughter Here, often go out of print.

In my desire to serve my target audience better by striving to reflect the true experience of growing up in all aspects of the word, I committed myself to read as many books that talk about puberty as I could. My list isn't extensive, by all means. But here are some titles that have used this time in a girls life as an opportunity to create memorable characters and premises.

Are You There God? It's Me, Margaret, by Judy Blume. Isn't this cover amazing? 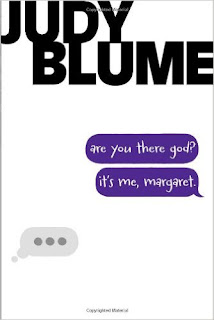 Twelve, by Lauren Myracle, which follows in Margaret's footsteps with a modern day twist 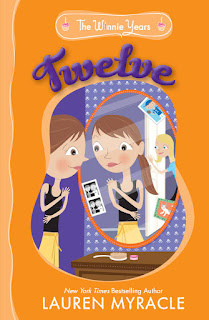 No Laughter Here, by Rita Williams-Garcia, featuring ten-year-old Akilah as she tries to deal with early puberty and her friend's secret 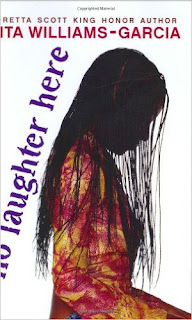 Real Mermaids Don't Wear Toe Rings, by Helene Boudreau, in which a girl discovers she's a mermaid after she gets her first period. 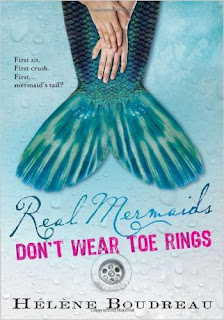 Finnikin of the Rock, by Melina Marchetta, in which Evanjeline has the power to travel through dreams when she's on her period (a favorite, even though the series is definitely YA,) 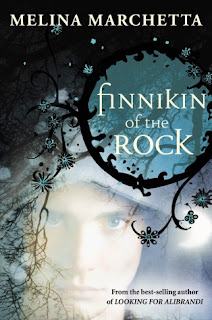 Protector of the Small and Alanna, the First Adventure, both by Tamora Pierce. Keladry and Alanna deal with puberty as they try to become knights

Period Pieces, by various authors, including Cynthia Leitich-Smith, Jane Kurtz, Uma Krishnaswami, and others. Each short story represents a girl dealing with her first period. The cultural diversity in this volume is just beautiful. 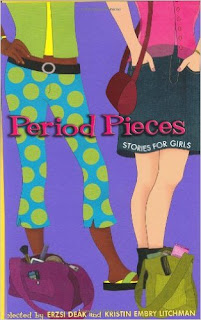 Children read to learn about the world, but ultimately, they read in order to learn about themselves, and to acquire the tools required to navigate life’s challenges. Books are the perfect medium through which children (not only girls, but boys too) can learn that menstruation and puberty aren’t gross or shameful topics relegated to whispered chats in a bathroom in junior high or even elementary school. When authors acknowledge this pivotal moment in life, they have the power to give voice and importance to an event that changes a girl forever.
Not every middle grade book needs to address puberty, but the positive impact on children upon seeing menstruation realistically portrayed in fiction should be an incentive for all of us striving to reflect the true tween experience in our stories.

Now it's your turn, my friends: Do you have any books to add to the list?