Alice, East Germany, and the Un-Birthday of CLOUD AND WALLFISH, by Anne Nesbet

When young Noah Keller gets carted off to East Germany by his parents in 1989 (at the start of my new novel for kids, Cloud and Wallfish), he has to leave almost everything behind--even (what he thought was) his name and (what he thought was) his birthday. He does manage to grab one old book to carry along, however--the old edition of Alice in Wonderland & Through the Looking-Glass that used to be his mother's.

"Noah had picked it off the shelf this very morning, because he always had to have something to read in his bag, just in case. This particular book looked battered but cheerful. It had lost its dust jacket years ago; rows of red-ink and black-ink rabbits trotted away on the cover in a diamond pattern." 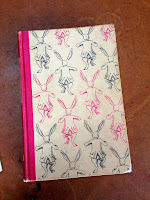 Yes, this is the (real) copy of Alice that I grew up on; now it's living a second life as a (fictional) book in the hands of a (fictional) boy in a (really) complicated moment in history.

Of course, the book had to be Alice! And not just because of the most obvious metaphor, of West Berlin and East Berlin staring at each other across the Wall like looking-glass worlds--for that matter, not even because of the second-most-obvious metaphor, of the two sides playing a chess game in which the playing pieces are living creatures (although the strange-looking page in the book in which that chess game is "explained" plays a role in the twisty plot of Cloud and Wallfish). 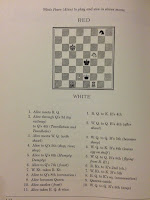 But also because of a dozen other peculiar Alice moments, which have haunted me since I was an Alice-aged child, and which kept coming to mind when I was living in East Berlin in 1989 as a graduate student. Traveling to East Germany at that time was, for an American, as Noah's father says, like going to a version of Alice's wonderland: "a fairyland with lots and lots and lots of rules." A place that was fascinating and scary, both at once.

The East Bloc and the West played their very serious spy-versus-spy games in Berlin, and sometimes it was hard not to think of the Walrus and the Carpenter, taking the little Oysters out for a walk along the beach (from which no little Oysters return). Alice, trying to sort out who's good and who's awful in that poem, finds herself somewhat flummoxed: Alice was the book where I first had to face the idea of a world where heroes with clean hands were not guaranteed, where ethics and morality were, despite the chess diagram frontispiece, not particularly black (or red) and white, but complicated. 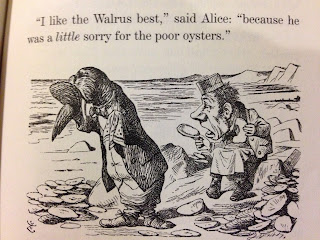 ("He ate more than the Carpenter, though," says Tweedledee, not making things easier for Alice.)

And while large, serious things were going on between governments in 1989, people like (fictional) Noah and (real) me nevertheless made true friends. Noah has it far worse than I did, because he has more secrets to keep. His friend, Cloud-Claudia, can't even know his real name, which of course causes Noah pain, especially since Cloud-Claudia believes firmly that "in your name is a little seed of everything that you are": 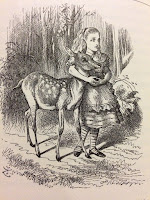 "Noah was thinking about the wood in his Alice book, the one where things have no names, where Alice doesn't know she's Alice anymore, and the fawn she's walking with (until they reach the end of the wood) doesn't even know it's a fawn. There's a picture in the book of Alice and the fawn, leaning close together: friends--until a moment later when they reach the end of the wood and remember who and what they are, and the fawn takes fright and runs away. Noah could see that forgetting one's name could be a problem--but also that someone finding out you are not who you said you were could also be a problem."

In the end, East Germany turned out not only to be maintaining a Wall, but to be perched on top of that Wall, like Alice's Humpty Dumpty. We didn't know, when we were living there in the first half of 1989, that the great fall would happen THAT fall! It would have been easier to say good-bye to our friends if we had been able to see into the future. But we couldn't see, and leaving was hard.

Now many years have passed since the dramatic year of 1989, and it is time to celebrate Cloud and Wallfish's birthday--or rather, more fittingly, its un-birthday. As Humpty Dumpty points out, via the magic of math, there are 364 un-birthdays to every lone little birth-day. 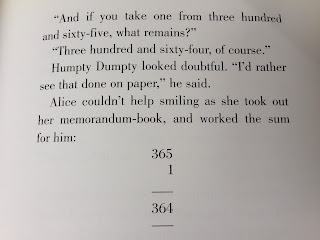 Noah, like Humpty Dumpty, knows something about the wobbliness of birthdays, so we will let Noah and Cloud and Wallfish celebrate their un-birthdays together, today and tomorrow and perhaps many times over again. 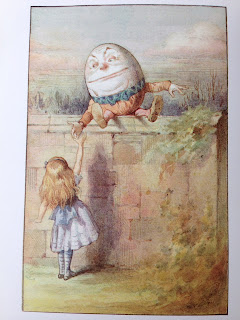 Email ThisBlogThis!Share to TwitterShare to FacebookShare to Pinterest
Labels: Alice Through the Looking-Glass, anne nesbet, Cloud and Wallfish