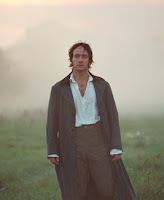 We just finished watching the Colin Firth version of PRIDE AND PREJUDICE because I am indoctrinating my daughter into Jane Austin long before she’s old enough to read the books. It has nothing to do with Colin Firth. Really. We’ve already watched the movie version with Matthew Macfadyen a few times. It’s all for educational purposes, even if the book itself doesn’t have Darcy striding through a misty field to meet Elizabeth. Sigh…. Focus, Dee, focus. Anyway, PRIDE AND PREJUDICE is in my top ten all time favorite books. In reading books over and over I’ve realized I learned so much about writing from them.

I love the character development in the book. We realize very quickly Mrs. Bennet’s outrageous character through the dialogue when she immediately states one of her daughters needs to marry Mr. Bingley before anyone has met him. Her continued dialogue builds a picture of a very silly woman. And from just a few lines on the second page,  the reader also quickly learns the nature of the relationship between Mr. and Mrs. Bennet and something about Mr. Bennet's personality.

Mrs. Bennet: “You take delight in vexing me. You have no compassion for my poor nerves.”
Mr. Bennet: “You mistake me, my dear. I have a high respect for your nerves. They are my old friends. I have heard you mention them with consideration these last twenty years at least.”

I still smile every time I read those lines. Another writer might have put in a paragraph of Elizabeth describing her parents’ flaws, or put the focus on Elizabeth’s annoyance with her mother. It made me realize that the method Austin uses avoids some of the problems which can happen when trying to write a scene where a main character doesn’t like another character. Too often, if it’s written so that the MC is describing the other character, it comes across as whiny or overly critical. Writers often get rejections is because an agent or editor will say, "I didn't like the MC" or "I didn't connect with the character", and it makes me wonder if it is because of the way a writer is handling certain scenes like this.

I was also fascinated when I went back to look at the book for this post, how little Austin describes the settings. There are no details about the Bennet’s house, very little about what the girls wear, no description of the assembly hall where they go to the dance, etc. Her writing is so precise, we don’t need all of that to imagine the scene. It’s really quite amazing to see how she does it. I know world-building is important, and I love to read it when it's well done, but it's clear to me that good world-building alone won't trump weak characterization or dialogue. It's like the extra spice to the meal, but it's not the focus. Next time I read the book, I'm sure I'll recognize even more techniques that have made this book the classic that it is.

So what favorite books have helped you? (Feel free just to comment on Mr. Darcy if you like.)