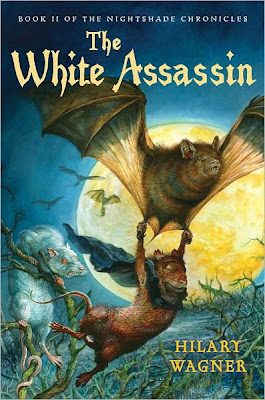 It was such a thrill last year when Nightshade City came out, but an even bigger thrill this year to officially be a series! You never know what's going to happen in life and if you'd have told me years ago I'd be writing a middle-grade series about super intelligent rats, well, let's just say I'd think you were spiking your Captain Crunch with something not exactly legal. ;)
THE WHITE ASSASSIN, Book II of the Nightshade Chronicles is officially out! My blog tour just started last week, so be on the look out, because many of these fantastic bloggers are giving away a signed ARC. Speaking of signed things...I'm giving out a signed hardcover of The White Assassin! To enter, simply follow Project Mayhem and leave a comment! I'll be announcing the winner Tuesday, October 18th.
For those of you who know the series, this book is all about the rat we love to hate, Billycan! You know I love bad guys, so having a book dedicated to one was an honor to write. Maybe by the end you'll understand why he's so darn bad!

Here's the blurb:
Book II of the Nightshade Chronicles begins three years after Juniper and his rebel band liberated the Catacombs from Billycan's vicious control and established the democratic Nightshade City. A sense of peace has settled over Nightshade, but it is a false one. Billycan, the White Assassin, has been found deep in the southern swamps, where he now rules a horde of savage swamp rats eager to overrun Nightshade City. With the help of an ancient colony of bats and an uneasy alliance with the swamp snakes, Juniper and his council set out to thwart Billycan's plans. When a shocking secret is revealed everything changes. The fate of Nightshade City and the life of Juniper's only son depend on Juniper's decision: should he help his mortal enemy? The past resurfaces with devastating impact in this sequel to Nightshade City, a dark tale of intrigue, deception, and betrayal.


Thanks to everyone who has been so supportive to me and my writing! Writers are such a kind and encouraging group of folks and I'm lucky to have gained so many friends because of it.
xoxo -- Hilary