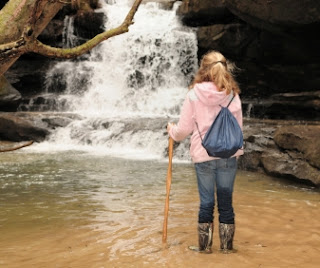 Imagine this scenario-a grade school recess and sixth grade girls who inhabit a particular spot that has been their traditional hangout, where they act out plays they write, have drawing contests, or just sit and talk. Enter sixth grade boys, who for reasons unknown have decided they now want the spot. What do the girls do? Their first strategy is to try to talk about boring things to drive the boys away. Some of these girls have been caught up in the urban farming trend that has hit the city, raising chickens, so they are wildly interested in all things poultry. Lots of chicken talk ensues about the cuteness of baby chicks and what to name them. Boys respond by telling disgusting stories about chickens and ways they can die. The situation devolves until leaf and mulch throwing at each other draws teachers. All are sent inside.

These kids are only months away from 7th grade and new schools, and there is a lot to learn about how to get along in that new world. This is an actual scenario that happened yesterday at my daughter’s school. (My) Nook is now filled with middle grade books about boys and friendships, because that’s what my daughter wants to read. She has picked them herself based on recommendations from her friends, because I am the clueless mom when it comes to these sorts of books. None of them deal with any of the serious issues Michael G-G talked about in his last post on Project Mayhem, but there’s a need for these lighter books as well, especially for those kids whose geeky parents *cough* are little help in giving advice on navigating a tween social scene.

BOYS ARE DOGS (Annabelle Unleashed series) by Leslie Margolis
Sixth grader Annabelle has moved from an all-girls Catholic school to a public middle school where the boys run through the halls like wild animals. It’s all bewildering and overwhelming to her, and she dreads going to school. She also has a new puppy, and in reading the book on training it, she decides that just maybe boys can be trained with the same techniques.

Now I know some of our male readers may be insulted by this premise, but the second book in the series is titled GIRLS ACTING CATTY, so females don’t escape completely. I remember an old 1960s movie based on the idea of dog training and romance, but I can’t remember the title. If anyone else does, please leave it in the comments. There is also a third book coming out in May in the Annabelle series, EVERYBODY BUGS OUT, and I'm sure it will appear on my ereader the day it does.

Four sixth grade girls with very different personalities become friends after their mothers form a book club to read classic books. LITTLE WOMEN is the choice in the first book, and details about it and Louisa May Alcott’s life are woven in to the story. There are five books in the series so far, and in each, the book club is the backdrop for the stories about the girls and their families, and their lives at school. These books remind me a little of some of the old English village life stories, like those by Miss Read, and could be the kid version of AND THE LADIES OF THE CLUB by Helen Hooven Santmyer.

If anyone has recommendations for other books like these, please let me know. And here’s a question-Did you read these sorts of books when you were that age? Did you learn anything about boys (or girls) from those books?