Document Map is a setting in Word that lets you navigate around a document quickly, and view the layout of a document at a glance. This is especially useful when dealing with a long document like a novel manuscript. Now that I know how to use this feature properly, I have no idea how I worked on writing without it.

Most of the Project Mayhem authors probably already know about it, but when I learned about the Document Map recently, and then shared about it on Facebook, I was amazed how many writers I know didn't know about it.

So, I'm going to write this post based on Microsoft Word 2007, which is what I own, and what I write in, but my understanding is that the feature exists in everything since Office XP (Word 2003), and is even better in Word 2010. Enabling and using the feature might be a little different in the different versions, but I'm sure you can Google the settings for whichever version you use.

For MS Word 2007, here is a screenshot of how you enable the function:

So that's VIEW on the banner, then click the box next to "Document Map," to place a check mark in it, and then the Document Map pane will appear to the left of the document itself (that dropdown menu can also show thumbnails).

When you're ready to create your first heading (in a novel this might be the title), which is like the highest level in the tree directory of an outline, you need to switch back to HOME on the banner. That will allow you to select style, as seen here:

The default format is probably not how you want it to look in a novel, but we'll get to customizing it in a moment. For now, light blue 14-point Cambria works fine when creating an example outline. I'll show you what this does to the Document Map pane in a second.

For now, you'll need at least one sub-heading to create a directory tree. This is what that looks like: 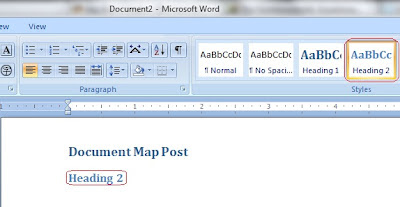 Keep in mind, that these styles only appear with these default settings when you open a new document. I have found that when trying to add these setting to a manuscript I first started years ago, the styles are all kinds of wonky. You can edit them manually, but I've found it much easier to create a new document, build the headings exactly how you want, and then paste the rest of your text in.

So, now that you know how to enable Document Map, and how to create the first two headings, this is what an example outline looks like, with four levels of headings, and then what that does to the document map pane on the left: 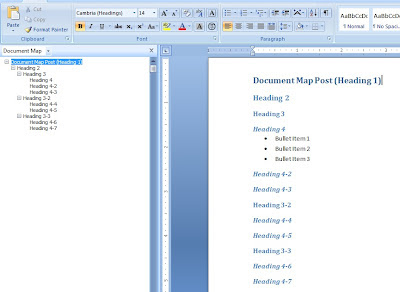 That's a little blurry, so here's a closeup of the map pane: 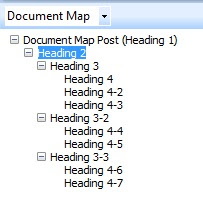 Isn't that convenient? Imagine a manuscript with 3 sections, and 34 chapters. It is so much faster to be able to jump around the document using this feature, expanding and contracting your headings on the left, and then clicking on whatever section you need to jump to. This feature is amazing during revisions. I have a friend, Adam Heine (who also actually taught me this feature), who even uses a level 5 heading for each scene within his chapters. I haven't found this necessary yet, but the fact that the option is there is pretty nice.

Now, you probably don't like light blue 14-point Cambria to show up in your novel manuscript, so how do you edit the formatting of these headings, so that it fits the style of your writing? There is apparently a way to do it by right clicking the text and then clicking on the paragraph settings, but I've found it much easier to right click the style, and the "modify," like this:

Which will bring up this window, that allows you to customize how you want the style (heading) to look: 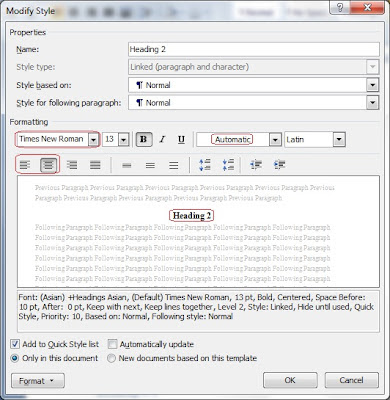 Note the outlined font color of "Automatic," (which is basically black), the outlined centering of the paragraph, rather than "aligned left," and the font changed to "Times New Roman," which is the default in the majority of the publishing industry, rather than "Cambria." Now, I didn't change the font from 13-point to 12-point for this example image, but in a novel manuscript, even for a chapter title/heading, you probably should. Some agents and editors may ask for something different, and you can certainly Google, "default manuscript formatting," for better expert opinions than mine, but I keep the entire text of my manuscripts in 12-point Times New Roman, automatic color.

Does that all make sense? I certainly hope so, because I'm pretty new to this, and am definitely no expert. If you have any questions, please be sure to ask them in the comments, and if I don't know the answer, I'll try to find it for you.
Posted by Matthew MacNish at 7/30/2012