An Interview with Polly Holyoke, Author of THE NEPTUNE PROJECT 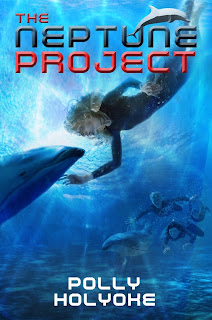 What inspired you to write this story?
I’ve often wondered where our species would go if we so totally foul up the land of our planet that we render it unlivable. It’s always seemed logical to me that eventually we would try to live in our oceans. After all, five-sixths of our planet is covered by seas. But first we would need to figure out a few small technical problems… such as how to breathe water! Genetic engineering takes care of that challenge very conveniently for the characters in THE NEPTUNE PROJECT.

What was your publication process like from initial idea to sale?
I was fortunate to have a relatively quick trip for this particular project. I wrote ten chapters and started marketing a proposal for THE NEPTUNE PROJECT, and my agent’s assistant wrote back shortly after Sterling Lord Literistic received it. He said they wanted to see the rest of the novel RIGHT AWAY. The funny thing was, I had completed six children’s novels before this one, and they asked to see the one novel in my closet that I hadn’t completed! I wrote and wrote and had the whole of the story finished four months later. Then I had a nail-biter of a fall waiting to hear if the main agent liked it, and HE DID! He sat down and read it in a day, and he staged an auction for it a week later. Then he pulled off another wonderful coup and sold the book to Puffin Books UK, so I started off with a foreign sale. I still can’t quite believe I’m getting paid twice for the same work, and that kids in the Commonwealth countries around the world are going to be reading my books!

What books shaped you as a reader and writer, from childhood to present?
I have always loved fantasy and science fiction. I read lots of C.S. Lewis and J. R.R. Tolkien, and later I loved Ann McCaffrey’s dragon books. I think reading so many books with excellent world-building in them helped me to understand how important that aspect of science fiction is.

What is one thing people misunderstand/tend to misunderstand about science fiction?
Sometimes sci/fi authors have incredible premises, cool technology and non-stop action, but the very best sci/fi, in my opinion, includes unforgettable characters. THE HUNGER GAMES works so well because Katniss is such a strong and well-developed character with plenty of issues and flaws.

Are you working on anything new?
I recently completed Book 2 in the Neptune series for Puffin UK, and I’m hoping they’ll want a third book which I already have plotted. But in the meantime, I’m always jotting down ideas for new stories. I sometimes wonder if the creative well might run dry for me, but somehow my subconscious is most obliging and new concepts and premises keep bubbling up!

Thank you, Polly, for joining us today! Best of luck with your debut.
Posted by Caroline Starr Rose at 5/20/2013