Reboots, Kids, and their Interest, by Matthew MacNish 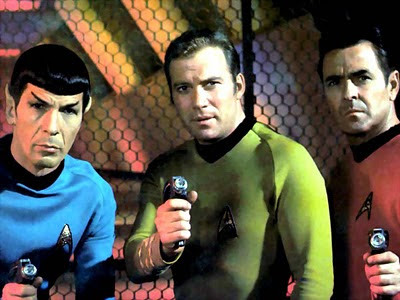 So last weekend I took my kids to Star Trek, Into Darkness, which, in spite of some huge writerly no-nos (sorry J.J. Abrams, you're not quite Joss Whedon) was a really entertaining film. The oldest had seen the original 2009 reboot, but she wasn't nearly as excited over it (partially because she's a Cumberbatch zealot, but that's neither her nor there) as she was this one.

I'm not sure I blame her. Sure, the first reboot was better written, with better character arcs, and a more direct progression of plot and conflict, but there was something about this new one, something just a little bit beyond the edge of consciousness, that really whet the appetite.

Is it the CGI? Perhaps. The additional casting? Surely Benedict played a part. The gimmick of 3D tech? I doubt it. So when does an inferior tale present an exciting thoroughfare that brings new fans into the fold of an existing franchise?

Well, I'm not marketing guru, but I would argue that the nature of the medium of film plays a big part, especially when combined with the instant gratification high sparkle high contrast advertisement nature of modern culture, but I don't think that's enough to explain it all. I think the existing franchise of Star Trek is the biggest factor in why my kids are now so fascinated with every iteration of its canon.

Similar arguments can be made for The Lord of the Rings, and even Star Wars. Heck, even the Harry Potter movies surely brought more readers to the books. But is it only movies that do this? I'm curious.

ABC's Once Upon a Time has my younger daughter curious about reading fairy tales.

But those are both TV shows. What about books? I can't personally think of a book series that was rebooted years later, whether by the original author or not, but surely there is one out there? Readers? Can you think of any?

And more importantly, be sure to check out yesterday's post. Here at Project Middle Grade Mayhem, we're holding an epic giveaway, choked with incredible prizes, as we try to push from 700 to 1000 followers. Please - spread the word! Tell all the readers, writers, and bloggers you know, and let them know to swing by Project Mayhem and become a follower.
Posted by Matthew MacNish at 5/31/2013