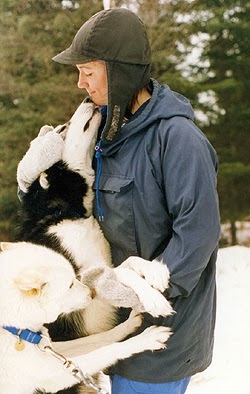 Terry writes outdoor adventure stories. When she’s not writing, she works as a Conservation Officer. She loves living in northern Ontario where she can snowshoe, kayak, and fish—all in the same month! Terry’s newest middle grade novel, ICE DOGS, hits the shelves tomorrow.

Cover Copy: Victoria Secord, a fourteen-year-old Alaskan dogsled racer, loses her way on a routine outing with her dogs. With food gone and temperatures dropping, her survival and that of her dogs and the mysterious boy she meets in the woods is entirely up to her.

Today we are lucky to have Terry Lynn Johnson share an experience that inspired her writing.

A Journey that begins with Doo

My first-ever published articles were both accepted on the same day. Adventure Kayak Magazine bought, How to Pee Out of a Kayak, and Dogs in Canada bought, Frozen Turd Wars. Shortly after, I started writing stories for middle grade readers on the advice of a writing mentor. Looking back I can see why she might have concluded that would be a good fit for me, as it doesn’t seem that I have outgrown toilet humor.
Frozen Turds was about one of my lead dogs, Apollo, who took his excrement seriously. He liked to erect towers in odd places. The article mentioned a certain neighbor, and a memorable dogsled ride. I’d like to share that story in a bit more detail.

I had been trying to persuade Lisa to come dogsledding with me, but she wasn’t keen. She sold Mary Kay cosmetics for a living, and her idea of a good time and mine were slightly different. However, one day she accepted and I set forth to impress her. I wanted to show her how awesome this dogsledding thing was. For extra power, I hooked up eight dogs. I snugged her in to the dogsled, which I had placed on the other side of the snowbank before hook up so that it would be flat and comfortable for her. With this lack of foresight, I called to the dogs and yanked the snub line to set them loose. As soon as I did this, I realized we were on the wrong side of the snowbank.
The sled launched like Santa’s on Christmas Eve, and for a few moments we had a fine ride. But as we descended, we canted sideways and unfortunately landed at the spot where Apollo had been — leaving his fresh, steaming tower.
The dogs didn’t stop though, not for a minor thing like a tipped-over sled. We continued down the trail. Me face down, hanging off the back runner, and Lisa … poor Lisa cocooned inside the basket, which plowed snow along the way. I could hear the muffled screams.
When we finally jerked to a halt, I stood to dig my passenger out.
“Are you okay?”
“Gah!”
“You’ve got some…in your hair.”
“Gaah!”
“Ooh, and it’s … um, in your ear…you might want to…let me brush this off…wow, that’s ripe eh?”
She never did come with us again. But I had a great story to share. And that’s how these things get started. One story at a time, till one day you decide to write a few down and send them in to a magazine. I’m so glad my mentor suggested I try fiction. Hopefully, I’ll be lucky enough to keep writing — the real-life canine characters I have known are a bottomless well of inspiration.