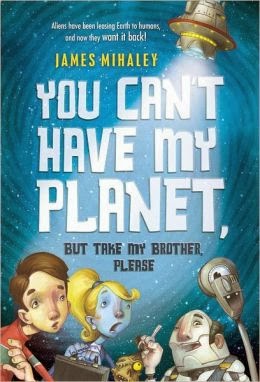 A couple months ago, I showed my 5th grade class a video for Project Mayhemer James Mihaley’s award-winning novel, You Can’t Have My Planet, ButTake My Brother, Please. When I told James how much they liked it, he offered to send us a signed copy, which morphed into a writing contest for my students.

Both my reading/writing classes wrote stories (or a portion of a story) involving elements of James’s book – aliens, robots, and/or rotten siblings. The students voted on six finalists, and James selected a winner.

Since many readers of this blog are middle grade writers and teachers, I thought I’d share the winning entry here, so you can see the bright potential of young writers. James had nice things to say about all six finalists, but this is why he selected Rachel’s story as the winner:

Her dialogue was sharp.  I thought there were some wonderful details, like the blue mirror floating in thin air.  And the ending was superb.
Rachel is excited that I’m sharing her story here today. Please let her know what you think!

MY BROTHER’S AN ALIEN by RACHEL

“Matthew! Get up,” I yelled
I strolled into his room.
“Ewww! What the heck is that stuff? It’s all over your bed! Mom is gonna freak!” I said in disgust.
“No she’s not because you're not going to tell her,” said my brother.
“With what price?” I announced
“I'll make your bed for a week?” he said in a questioning voice.
“Nope.” I said.
“I’ll, um, ohhh! I’ll give you twenty bucks?” he said in a questioning voice again.
“Deal!” I said in excitement.
I thought to myself, I can’t wait to spend my money on new boots, or should I save it up? Then all the sudden my mom interrupted my thoughts.
“Alexa! Get down here, you are going to miss the bus!”
“ Umm, mom, can you give me a ride?”
All the sudden I see the bus pass by. Honk,Honk!
“Sorry sweetie, I can't, I have a big meeting at 8:00. Works twenty minutes away. I’ll already be about five minutes late. Love you gotta go, bye!”
“Wait!” I screamed. Too late she was gone.
I dashed to my phone and called Casey. P.S. she is my best friend.
“Come on answer your stupid phone!” I guess the only other thing I can do is walk.
After walking 10 minutes I was almost there. A minute later, a huge shadow passed over me. At first I thought it was an airplane, but the shape was a circle.
I looked up, I gasped, then everything went black.
I started blinking my eyes until my eyes were completely open.
“Where am I ?!” I was so dizzy.
“Shhh, relax, you are going to be ok. Just lay down, I'll be right back.”
I thought to myself, ya know, if a person you dont even know tells you to lay down and relax when you're in a place you have never been before, I mean they practically just took me off the streets. Would you listen to them? Obviously I'm not.
I heard my brother’s voice. I tried to get up but my wrists and ankles were cuffed to the chair. What kind of place is this?
I heard somebody's voice coming. This time it wasn't my brother’s, it sounded familiar. I feel like I haven't heard it in a long time, like since I was a baby. A young woman came in. I feel like I have seen her before, like I said, when I was a baby. She had golden strawberry blond hair, she was also very skinny. She looked like she was four foot seven and had big dark brown eyes. I feel like we could be twins except for her height, but other than that we are practically identical.
“Hello, my name is Annika,” the woman said.
“Hi, I’m-”
She cut me off and said, “Alexa, ya I know I met you before, but to be specific I have meet you twice. Once when you were one, and another time when you were two. I know this might sound stupid, but, you're my sister, and I was a total idiot to leave you alone when you were two with someone that didn’t even know about Matthew’s kind. But I really regret it because now you're stuck here having to have to save a planet that you’re now on, and-”
“Whoa,whoa,whoooaaa, slow down. What are you talking about, I have to save a planet?”
“Ok, we don’t have much time, so here is the plan.”
“Ahhhhhhhhh!” I heard people screaming from outside.
“Help!”
“Oh, no,” said Annika. “Ok, stay calm.”
She took out a silverish goldish colored ball. She threw it on the ground. It turned into kind of like a blue mirror that floated in thin air.
“Come on we have to jump in.”
“Are you crazy!” I said.
“Ok, you have two options: you can stay here, get shot and die, or you could come with me and survive. Tik,tok, we don’t have all day.”
I jumped in. I landed in a room that was all fancy. All the sudden the portal closed. The silver/gold ball fell from nowhere into my hands. I realized that Annika never came through. I threw the ball on the ground and jumped through the portal.
I was in the room I was originally in. There was complete silence. The glass wall was shattered, but there was no one there. The only thing that stood out in the room was a note to me from Annika that said,

To: Alexa
Go to the warehouse on Planet 5.
From: Annika