Mythology and Folklore, by: Marissa Burt

I can still remember the smell of my middle-school library - I can almost see the way the high windows in the center lit up the reading area and how the shelves of books stretched off to ring the room. Because of my misfit schedule, I had study hall - the last class of the day - by myself, which meant I spent it under the so-called supervision of an elderly nun who rarely looked up from her circulation desk.

I never studied during study hall. Instead, I found a place on the floor near the bottom two shelves that held all the mythology and folklore books. I revisited Aesop of earlier years and discovered the wealth of Asian folk tales and the wit of African fables and the spine-tingling ghosts and fairies of Celtic lore. I never quite resonated with the capricious Greek and Roman gods and goddesses, but I gave them their fair due before losing myself in Hans Christian Andersen's complete fairy tales. I'm sure my strangled cry on the day I discovered what really happened to the little mermaid must have gotten Sister Veronica's attention.

I'm delighted to be revisiting some of these stories now with my three boys, and I've loved watching them get lost in the tales. I often read aloud to them during lunchtime, and the mark of a good story is one that has them sitting, sandwiches forgotten, with imaginations fully fixed in faerie-land. I thought to share some of our recent favorite reads with you, because I think the appeal for these stories is for every age range, including middle-grade readers. 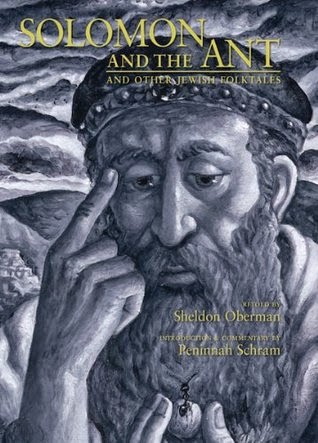 SOLOMON AND THE ANT: AND OTHER JEWISH FOLKTALES, by: Sheldon Oberman
"A treasure trove of forty-three religious, wisdom, riddle, and trickster Jewish folktales that have been told near the hearth, at the table, and in the synagogue for centuries. Sheldon Oberman, a master storyteller, retells the tales with simplicity and grace, making them perfect for performing and reading aloud. Peninnah Schram, herself an acclaimed storyteller and folklorist, provides lively notes and commentary that examine the meaning of each tale and its place in history." (summary from Goodreads)

**My boys would have had me read through this in one sitting if I offered. They LOVED these folktales - the combination of sly wit and trickster plot twists hooked them. We checked it out from the library, but it might end up on the Christmas gift-list this year.** 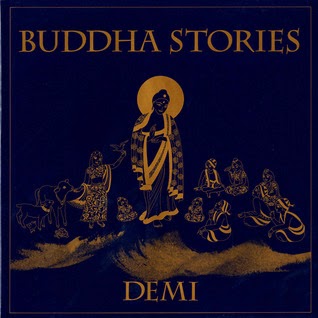 BUDDAH STORIES, by: Demi
"Throughout the ages, moral tales have been passed down from one generation to the next. Centuries ago in China, hundreds of parables were told by the Buddha to his devoted followers. His messages became widespread through fables adapted by famous storytellers like Aesop and La Fontaine. In this collection, the author has chosen ten of the most engaging classic tales from the Buddha's works. Compiled and illustrated by Demi, this wonderful collection of stories is sure to draw young readers into the ancient teachings of the Buddha, teachings that are as relevant today as they were over two thousand years ago." (summary from Goodreads)

**The illustrations in this book are so gorgeous. The tales are quite short but sparked much discussion around the lunch table.** 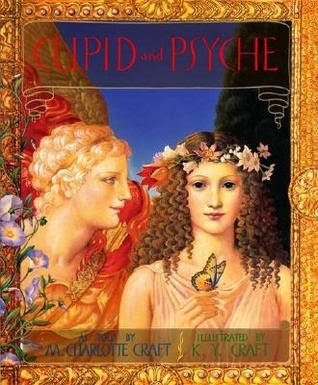 CUPID AND PSYCHE, by: M. Charlotte Craft
"Perhaps the greatest love story of all, Cupid and Psyche is unsurpassed in its richness and drama. Marie Craft's lively, suspenseful retelling of this classic Greek myth will appeal to young and old alike. And these legendary lovers have inspired forty lush luminous paintings by award-winning artist Kinuko Craft.

Lavishly illustrated and thrillingly told, here is a book to be treasured forever." (summary from Goodreads)

**My kids have a super-low tolerance for nail-biting suspense in stories, so we had a hard time with many of the collections of Greek and Roman myths. This one, however, was a win. The illustrations are indeed lavish, and the story well told. Runner up: ROMAN MYTHS, by: Geraldine McCaughrean.** 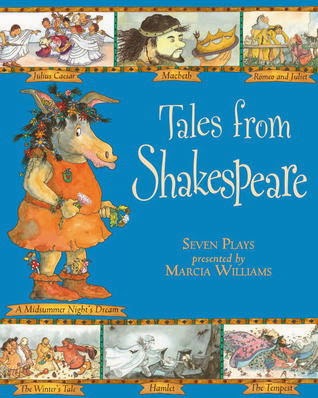 TALES FROM SHAKESPEARE, by: Marcia Williams
"Come wend your way along London's Thames River to the Globe Theatre, where seven favorite Shakespearean plays are being performed! Marcia Williams brings to life ROMEO AND JULIET, A MIDSUMMER NIGHT'S DREAM, JULIUS CAESAR, HAMLET, MACBETH, THE WINTER'S TALE, and THE TEMPEST, making liberal use of Shakespeare's rich dialogue. With the help of her signature comic-strip style, the Bard's 400-year-old masterworks become as relevant to young readers today as they were to theatergoers way back when." (summary from Goodreads)

**So I know this isn't really in the folklore/mythology category, but this book was such a win that I had to include it. Both the comic-like illustrations and the text adaptations are very well done.** 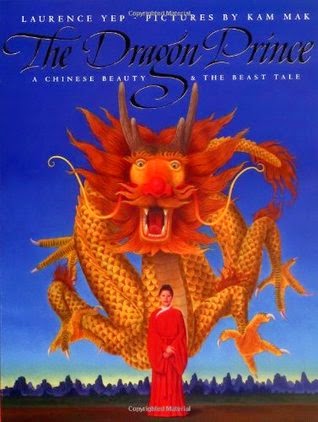 THE DRAGON PRINCE: A CHINESE BEAUTY AND THE BEAST TALE, by: Laurence Yep
"When a poor farmer falls into the clutches of a dragon, only Seven, his youngest daughter, will save him - by marrying the beast. Publishers Weekly praised "Yep's elegant, carefully crafted storytelling" and Mak's "skillfully and radiantly rendered illustrations" in this captivating and luminous Chinese variation of the beauty and the beast tale. A 1998 Notable Children's Trade Book in Social Studies (NCSS/CBC) A 1997 Pick of the Lists (ABA)

**Somehow this tale managed to be both whimsical and sophisticated at the same time. And the artwork is lovely.**

We've been aligning our reading with our history studies, so this list only scratches the surface. What about you, Mayhemers? Any favorite collections? When did you first discover folklore and mythology? For the writers among us, do you find it influencing your own writing?