ON PARTING WAYS WITH LITERARY AGENTS by Joy McCullough-Carranza 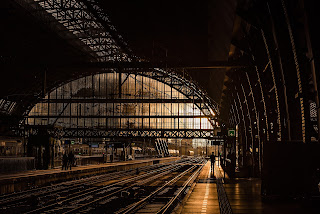 Many stops along the writing journey are filled with maps and guidebooks and tour guides clamoring for the writer’s attention. Query Station, ‘The Call’ Street, Debut Year Blvd…these are well-lit and heavily trafficked.

Some other stations are necessary to pass through, but for whatever reason, they have nary a flickering bulb and certainly no tour guides. We rarely talk about being on submission, for example, or what happens if your editor leaves in the middle of your series. Another poorly illuminated stop along the writing journey is the one where writers part ways with their agents.

Here’s the thing though—Breakup Station is poorly illuminated, but it’s not lightly traveled. Many, many writers part ways with their agents and return to the query trenches. Some quickly find another agent and some toil in the trenches for another long spell. Almost all feel alone, and like they’ve failed in some way. Because it’s so poorly illuminated, they have no idea how many fellow travelers are stumbling around this station.

So I hauled some floodlights into Breakup Station. I wanted to see who was passing through there—a LOT of people, it turns out—and for them to see one another.

I created a survey for writers who had parted ways with an agent and I shared it with a closed Facebook group of Pitchwars mentors—around 100 people. Those folks in turn shared it with debut year groups for 2014, 2015, and 2016, and with the MG and YA Binders groups. I had over 100 survey responses within 24 hours.

If you are in Breakup Station: YOU ARE NOT ALONE.

So let’s look at some of the responses to see why writers and agents part ways, and what happens after they do. (And you guys, I tried super hard to make these into pretty pie charts, but I deal in words and it would have been simpler for me to make five actual pies.)

Question: If your agent initiated the breakup, what was the reason? (Check all that apply.)

Other – Several of these responses included an agent switching to another agency and culling her list in the process, and an agent deciding to focus on a different genre or category.

QUESTION: If the writer initiated the breakup, what were the reasons (check all that apply):

Other – Many of these responses included excessively slow turn-around time in reading manuscripts, getting feedback to a writer, responding to emails, or putting manuscripts on submission. Also included: concerns about the strength of the agent’s connections, agent not passing on feedback from editors, or writer not wanting to stay with the agent when they made a big career move (like to another agency).

QUESTION: How long were you with agent before splitting up?

QUESTION: If you’ve gone on to get another agent, how long did it take after your initial split?

Now, I’m throwing a lot of info at you, but there’s so little out there on this topic that I want to do it full justice. I know many writers who head into Breakup Station despair of ever getting an agent again. They think they’re damaged goods (actual wording I saw recently), they think the manuscript their agent subbed is dead forever, they think they’ve missed their shot. I wanted to get an agent’s perspective on receiving queries from writers who’ve been previously agented, so I talked to Brent Taylor of Triada US Literary Agency. He was kind enough to answer candidly. Querying writers should consider him—his manuscript wish list is here.

Me: How does it affect your consideration of a query when you see a writer has parted ways with a previous agent?

Brent: I want to note upfront that all of this is very much case-by-case. But for me, it sometimes works in the writer's favor and I'm more forgiving of query mistakes/my initial hesitations about the project if I know that this writer's work was "good enough" for a different agent. Not all agents might feel that way, though. I'm usually giving the writer the benefit of the doubt and assuming that the author-agent split was amicable and because of stylistic incompatibilities.

But there are many other factors. Sometimes I'm very friendly with the agent that the querying writer parted ways with, and I might check in with them first just to maintain my professional relationship. Agents talk. We're a talkative crowd.

Me: Would you sign a new client with a manuscript that had previously been seen by editors?

Brent: It depends on how I feel about the project and my vision. Every agent has different instincts, and I've certainly seen submissions lists that differ drastically from ones I would have come up with. So let's say you queried me with a middle grade novel and I felt it was a perfect fit for the more traditionally literary imprints with award-winning lists, and your previous agent had mostly submitted it to the imprints I considered more on the commercial side -- then there's certainly some wiggle room there. But I've also been in a position where I've had to say, "Look, this is great, but all these editors that passed are the same editors that I would have gone to." I know that's a completely unhelpful answer.

Me: How many editors would be too many for you to take on an already-subbed project?

Brent: I say at above ten editors, your ship has sailed and you need to write a new book.

Thanks for your time, Brent!

I hope this gives some hope to those travelers passing through Breakup Station—or pondering a stop there. You aren’t alone. It will be a temporary stop for you, but there are fellow travelers to meet and wisdom to be gained. Much love on your journey.
Posted by Joy McCullough-Carranza at 1/07/2016