On HIDDEN FIGURES, by Anne Nesbet

Christmas and Hanukkah coincided this past December, which meant our Jewish/Quaker/secular family's chaotic all-things-at-once version of the holidays--best latkes in the world (celery root and parsnip, YUM!), combined with presents, the Beatles, and Christmas carols--almost sort of made sense, for once. And then all fifteen of us, ranging in age from approximately 11 to over 94, trooped across the street to go to the movies.

We pretty much dominated the lower left-hand quadrant of that theater. We settled in. Some of us had popcorn. And soon we were transfixed.

The movie we had chosen had just come out that day: Hidden Figures. It tells the story of three remarkable African-American women--Dorothy Vaughan, Mary Jackson, and Katherine Johnson--who worked as mathematicians and engineers at the National Advisory Committee for Aeronautics Langley Aeronautical Laboratory, renamed NASA in 1958. The film uses John Glenn's 1961 space flight--the first time an American orbited the earth--as its dramatic highpoint; it was the unsung human computers who made the calculations that ensured his safe return to earth.

How had we not heard of these women before? It was thrilling to see them rise up through the ranks of the human computers--while faced daily with the harsh realities of segregation and discrimination. We all agreed--young folks, parents, and Grandpa alike--that this film was the best possible choice for a family outing at the end of 2016 in the United States of America. We really needed to see it. We needed to be reminded about the things that matter, and about the power of hopeful stubbornness to reshape the world. 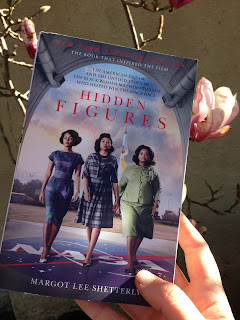 I've finally tracked down a copy of the book by Margot Lee Shetterly on which the movie is based, and I heartily recommend it. The movie simplifies the timeline and focuses on three women's stories in order to make the story more vivid, but the book helps you see the larger picture, the way the war shapes Langley, and then the way NACA/NASA, Virginia, and the United States slowly change in response to the persistent, courageous, and, I would say, patriotic pressure put on the old institution of segregation by women who thought their minds should get as much respect as minds housed in white, male bodies.

(I see there's a simplified edition of Hidden Figures for "young readers," but I haven't had a chance to look at it yet--my fingers are crossed that it's good.)

It seems to me that a worthy goal for 2017 might be to bring as many "hidden figures" as possible into the light. Whether we are reading books or writing them--or going to movies and then talking about them with our friends and family--let's try to foreground more stories about people who have played important but relatively forgotten roles in science, politics, social movements, the arts, and in history.

Our own mothers and grandmothers, for that matter--how well do we know their struggles, their stories?

I hope we can inspire a new generation to become avid detectives and researchers in their own right, willing to dig beneath the surfaces of things and to continue the work of making our understanding of history deeper, richer, and truer.
Posted by Anne Nesbet at 1/16/2017