On Fiction, History, and Wishing the World Were Otherwise, by Anne Nesbet

I've been thinking a lot recently about the places where fantasy and history overlap, and in particular about the strange things that sometimes happen when our stories revise the past by making the painful parts of history otherwise.
Making things otherwise is a desire very much at the heart of most writing, of course. It's pretty much the essence of fiction! In real life, we can't tweak what has already happened--we can't, in real life, heal wounds inflicted hundreds of years ago by one human being on another. But in fiction, we can. And so, we do. It strikes me that sometimes I find these twisted histories satisfying and moving--and sometimes the fictional mending of the past unsettles me. Loopholes, it seems, can have unintended side-effects.
I was recently quite moved by a historical fantasy by H. M. Bouwman, A CRACK IN THE SEA (2017), which is explicitly about loopholes, about "a crack in the sea" that allows doomed and desperate people from our world--Africans thrown overboard from slavers' ships, Vietnamese refugees whose boats are damaged by pirates and then sink--to travel to another world, where the water is sweet and people are very few. 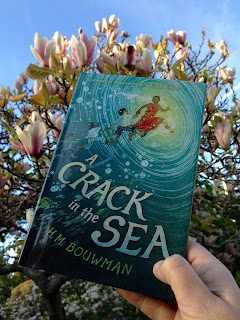 As Heather Bouwman explains in her very thoughtful Afterword, the inspiration for this book was the true, awful history of the Zong, a ship transporting enslaved human beings across the Atlantic Ocean: in 1781 the men sailing this ship threw 133 living people, men, women, and children, into the ocean to drown, so that the owners of the ship could collect insurance payments on the lost "cargo." One of the characters in Bouwman's story, a girl named Venus, comes from the Zong; the story of A CRACK IN THE SEA, as the author explains, had its origins in a longing to change what can't actually be changed:
"And the Zong is the heart and soul of my book . . . . [F]or me, the story first became alive with Venus--with my feeling that she had to escape, somehow, from this terrible historical fact, this thing from which, in real life, there was no escape."
From my perspective, the power of a historical fantasy like A CRACK IN THE SEA depends very much on the reader knowing that what he or she is reading is a counter-factual wish, that in real life, these real people died terribly--and we wish so much that that could be otherwise that we are willing to write stories in which something else happens. What happens, however, when a student who doesn't know about the real history of the Zong--or the real history of the Vietnamese refugees in the late 1970s--reads this story? Perhaps the effect is quite different.

Although Bouwman's story is a fantasy, it does its best to take historical suffering seriously (as her author's note reminds us), even while opening magical/historical loopholes. A more extreme example of that approach might be Guillermo Del Toro's film, PAN'S LABYRINTH, in which a brutal tale of the Spanish Civil War gains another dimension through its young heroine's fantastic adventures. How one reads the ending of that film depends on whether one understands the "loophole" (the fantasy kingdom) to have been really, truly, literally real or, more poignantly (in my opinion), if we take that "loophole" as a reflection of our human and endlessly thwarted desire for the world to be other than it is.

Other books go to bleak moments in human history and make them positively blithe, however. Remember the opening pages of J. K. Rowling's THE PRISONER OF AZKABAN (1999)? 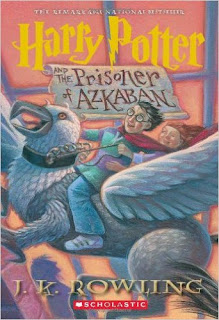 "Harry moved the tip of his eagle-feather quill down the page, frowning as he looked for something that would help him write his essay, 'Witch Burning in the Fourteenth Century Was Completely Pointless--discuss.'
The quill paused at the top of a likely-looking paragraph. Harry pushed his round glasses up the bridge of his nose, moved his flashlight closer to the book, and read:
'Non-magic people (more commonly known as Muggles) were particularly afraid of magic in medieval times, but not very good at recognizing it. On the rare occasion that they did catch a real witch or wizard, burning had no effect whatsoever. The witch or wizard would perform a basic Flame-Freezing Charm and then pretend to shriek with pain while enjoying a gentle, tickling sensation. Indeed, Wendelin the Weird enjoyed being burned so much that she allowed herself to be caught no less than forty-seven times in various disguises.'"

This description gave me a bit of a jolt the first time I read it, to be honest, and now that I've gone back to find it again, I understand better the reason for the jolt. The account here is jolly and lighthearted, but on the other side of this fictional lens (on the other side of this "otherwise") lies some pretty awful historical stuff, real people whose suffering had nothing at all in common with "gentle, tickling sensations." It's humorless of me to state the obvious this way, isn't it? But bear with me: I'm trying to figure out what makes some fantastical reworkings of history cut deeper than others. It seems to me that whereas A CRACK IN THE SEA focuses on the poignancy of the "otherwise" (by keeping the "terrible historical fact" close by, even while the fantastical loophole is opened), THE PRISONER OF AZKABAN puts more weight on the loophole, and lets the historical fact float away.
Have you read any historical fantasy recently? What effect did it have on you? Have you encountered stories in which the "wish that the world were otherwise" particularly moved you? Does a purely humorous approach to rewriting history unsettle you at all, or do you merely find it refreshing? (A good recent example of history rewritten for comic effect might be MY LADY JANE, by the witty trio of Cynthia Hand, Brodi Ashton, Jodi Meadows; in this novel Lady Jane Grey turns out to have been at the heart of various romantic and magical plots--and gets a happy ending, very unlike her historical fate.)
So perhaps what I am discovering is that I am most satisfied when some trace of the tragic historical fact remains, even if veiled, in the counterfactual rewriting--the tension between fact and wish can then work a very powerful and poignant magic of its own. I am very curious to hear your thoughts, however--on historical fantasy, on loopholes, and on wishing the world were otherwise....
Posted by Anne Nesbet at 3/13/2017